The truth behind the iconic movie and the crimes that inspired it. 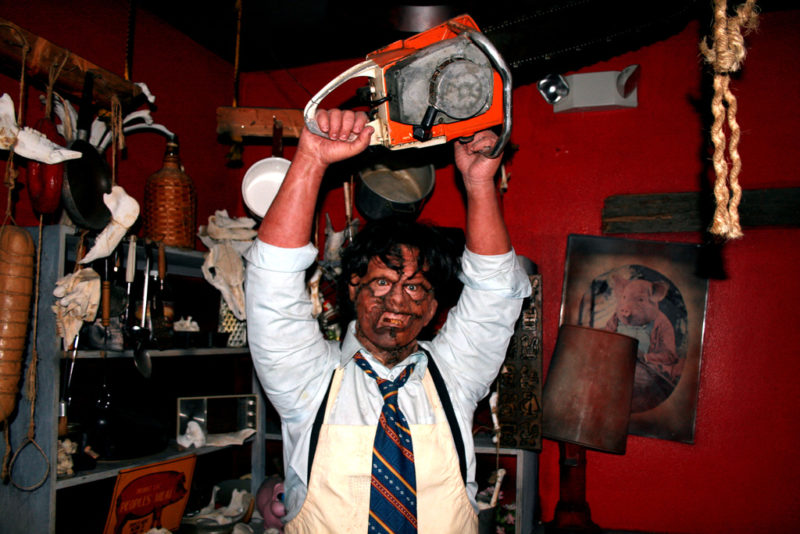 Leatherface and a scene from the Texas Chainsaw Massacre at Louis Tussaud's Palace of Wax.

Texas is number one in a great many things: oil, ranching, rodeo, cotton. But you may be surprised to know that we are also number one in horror. That’s right, our very own charming little low-budget film, “The Texas Chainsaw Massacre“, is considered by many critics to be the best (and most horrifying) horror movie ever made.

At the time of its release in 1974, the famous film critic Rex Reed said that it was the most “terrifying” movie he had ever seen. When the celebrated master of horror, Wes Craven, first saw the movie, he wondered “what kind of Mansonite crazoid” could have produced such a thing. Stephen King praised the movie. He said it had achieved “cataclysmic terror.” And my favorite critique comes from Anton Bitel who said that the “very fact that it was banned in England was a tribute to its artistry.”

In honor of Halloween, I thought I would help you appreciate this hallowed film; here are 10-and-a-half things you may not have known about the film.

1. Ed Gein is the name of the real criminally insane killer who inspired the character of Leatherface. He did not wear a leather mask. What he wore was worse: a mask made of human skin.

2. Ed Gein only killed two people, not dozens. Hardly a massacre. He did not use a chainsaw. He used a gun.

3. Gein did his killing in Wisconsin, not Texas. I know, disappointing right? Wisconsin Chainsaw Massacre just doesn’t have the same poetic ring to it.

4. So where did the chainsaw idea come from? Tobe Hooper, the director, said that he was in a Montgomery Ward store a few days before Christmas. The store was annoyingly crowded with aggressive shoppers. As he stood in front of the chainsaws he had a disturbing epiphany. He realized that if he started up one of those chainsaws the sound alone would part that sea of shoppers giving him a quick path to the exit. And that, ladies and gentlemen, is how iconic art is born.

5. One last thing about Gein. He inspired not only Leatherface, but he was also the demented muse for Norman Bates in “Psycho” and Buffalo Bill in “Silence of the Lambs“.

6. Perhaps the most horrifying aspect of “The Texas Chainsaw Massacre”, for the actors at least, was that it was filmed in the middle of the scorching Texas summer. You can see the sweat dripping off, even streaming off, the actors. Hooper said everyone suffered mightily because there was no stopping to wait for cooler weather. And even though some days were well over 100 degrees, they had to press on to get filming done in a month, come hell or high water – and hell is what they got.

7. In his much-praised book, “Chain Saw Confidential“, Gunnar Hansen, who played the character of Leatherface, said that the name of the depraved family in the first film is Slaughter, not Sawyer. If you look above the Coca-Cola sign at the gas station you will see “W. E. Slaughter BBQ.”

8. Hansen also said that the power of the chainsaw myth they created on film persists with such tenacity in Texas that people would not believe him when he said that no such chainsaw crimes ever happened in the state. People would say something like: “No, they happened. My cousin worked on death row over in Huntsville and saw Leatherface himself get the chair.” But this is understandable because the film falsely marketed itself as “based on a true story.”

9. The film cost less than $300,000 to make, and eventually grossed $30 million in the U.S. The movie had its opening in Austin, appropriately, since its director was a University of Texas professor and documentary cameraman. Though it is hard to believe, he tried to keep the gore and violence of the film to a minimum so he could get a “PG” rating. That didn’t work. He got an “R” rating.

10. Horror and humor are allies. The movie even spawned a hilarious Geico ad that has run the last couple of years – the one where four people are running from a killer and debating where to hide. One suggests they take the running car and another says that’s a horrible idea and suggests that they hide behind the chainsaws. Even Leatherface is astounded by their filmic ignorance.

10.5. The film’s gas station is now a kind of bed and breakfast in Bastrop. It’s called The Texas Chainsaw Massacre’s “Last Chance Gas Station”. You can get BBQ and spend the night in a cozy cabin. Chainsaw alarm clocks are certainly available. I understand the BBQ ain’t half bad. At least the owners are not, like those in the film, focused only on serving their fellow man.