Schools are opening in West Texas and summer rituals are coming to an end. Student athletes – like cross-country runners and football players – have already been practicing – getting ready at late-summer camps. At one sports camp in El Paso, though, the focus isn’t really on sports. 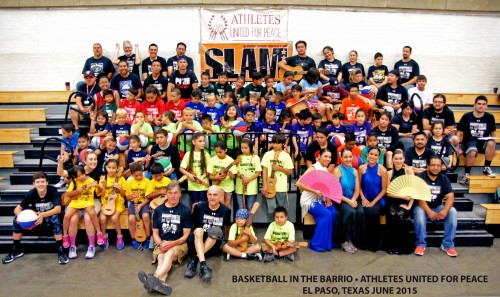 Dozens of kids – ages 6 to 10 – are dribbling basketballs splashed with paint across a giant canvas of craft paper. Michael James is one of the camp counselors. “The ball started to get covered with paint and then they began dribbling up and down, so there’s these there are these beautiful patterns over about 30 feet of paper on the floor. There’s all kind of stuff going on here.”

We’re in El Paso, in the Segundo Barrio, just a few blocks from the Mexican border. Rus Bradburd founded the camp. He coached basketball at the University of Texas at El Paso and at New Mexico State. He describes the daily drills.

“Every eight minutes they go to a different station. Every interval they go from a dribbling station to a percussion station to a music station to a poetry station and back to basketball again. So we weave in basketball and educational aspects related to border culture.”

It’s not your typical sports camp. Nine-year-old camper Paz Martinez even has trouble describing what she’s learned: “I learned lots of new basketball tricks and um…how to do…some different kinds of crafts.”

The three-day camp is called Basketball in the Barrio. And it costs one dollar for three days of activities. Bradburd started the camp as a reaction to other sports camps – which he describes as money machines marketed to wealthier kids.

“The basketball coach at the University of Texas probably makes $2 million a year,” says Bradburd. “Then he charges kids in Austin $300 to go to his camp. To me that’s an obscenity. Especially in our part of the world. This is a very poor neighborhood.”

The Segundo Barrio is known as one of the poorest neighborhoods in the nation. It has a special significance for U.S. Congressman Beto O’Rourke, who represents the area.

“Segundo Barrio in El Paso is the front porch of the United States. Some people call it the Ellis Island of Latin America. There’s so much incredibly history there.”

Michael James is not from El Paso, or even Texas, he comes each year from Chicago, representing Athletes United for Peace. The group formed as a response to the U.S. boycott of the Moscow Olympics during the Carter Administration at the end of the Cold War. “And then I got involved on a trip to Nicaragua in 1988.”

Even when governments are not getting along, athletes from warring countries compete in friendly competition. Joining James in El Paso is another member of Athletes United for Peace, Dave Meggyesy. The former pro football player got involved in the anti-war movement while playing for the St. Louis Cardinals in the late 1960s. “I really see sport as a process as a human activity that can really bring people together.”

Bradburd, the camp founder, has gained a reputation as a sought-after teacher of ball-handling skills. The kids learn fundamentals, but he wonders if some leave disappointed that the sole focus isn’t basketball. “So often dribbling is the first step to being interested in basketball. We could probably be sued if a kid wanted his dollar back.

Camper Paz Martinez is asked – did she expect more? – did she hope to come out of camp as a basketball wizard? She answers, “No, not really, but I got to make some new friends there.”

View a video clip here: Basketball in the Barrio