Brisket On The Griddle: Is It Barbecue Heresy, Or A Bacon-Like Treat?

While visiting a Panhandle barbecue joint, Daniel Vaughn wondered what would happen if he tried to finish a perfectly good smoked brisket on a flattop stove. 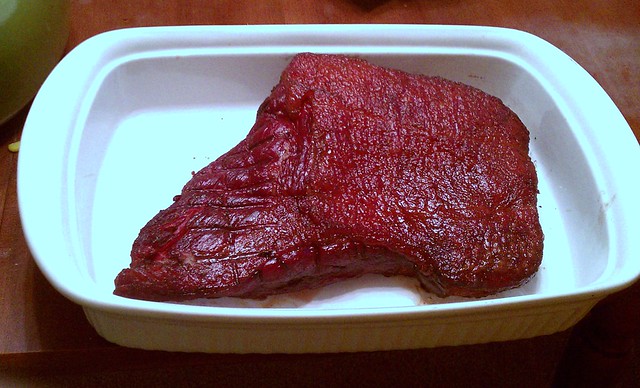 “Slow and low” is the mantra for making great barbecue brisket. But could another way – a method of finishing the brisket cooking process – offer a different flavor experience?

Where there’s smoke, there’s Daniel Vaughn, barbecue editor for Texas Monthly. He recently journeyed to the Panhandle to propose his idea for flattop brisket.

Vaughn got together with the owners and pitmaster of Evie Mae’s Barbecue in Wolfforth, Texas, outside of Lubbock. It’s one of Texas Monthly’s top 10 barbecue joints in the state.

“I had been many miles on the road, thinking about different ways of creating different flavors on a brisket,” Vaughn says.

He proposed placing a smoked brisket, fat side down, on a very hot flattop griddle.

“If you think about taking slow-smoked ribs out of the smoker, and finishing them on a hot grill to get them nice and crispy,” Vaughn says. “The great thing about a whole brisket is that you have this nice fat cap right over top of the whole thing.”

Vaughn says the experiment worked “flawlessly.” He says the weight of the brisket compressed the fat cap, and combined with high heat, it turned into a sort of bacon-wrapped brisket.

Vaughn says his method could work as a way to revitalize leftover brisket.

“Just get a cast-iron skillet out there, heat it up and put it fat cap side down and let it go,” Vaughn says.

He cautions against using the flattop method on “lesser” meats, or inferior pieces of brisket.

“A dry brisket is going to be dry, no matter how crispy the outside is,” Vaughn says.