Everything You Thought You Knew About Dinosaur Sounds is Wrong 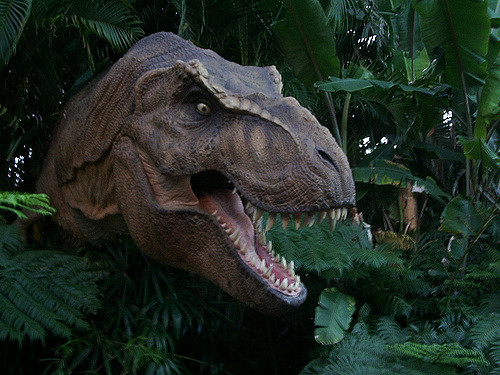 A new study says that dinosaurs likely made sounds more like doves' coos.

A new study suggests that the scary roars that dinosaurs made – think Jurassic Park-style bellows – might have actually sounded more like coos or hoots.

After examining the sounds and bodies of today’s birds, researchers say dinosaur calls most closely resemble the mating calls of ostriches. Julia Clarke, a paleontology professor at the University of Texas at Austin’s Jackson School of Geosciences, co-authored the research paper Coos, Booms and Hoots: The evolution of closed-mouth vocal behavior in birds.

She says that by studying today’s “living dinosaurs” – birds – and reptilian relatives, they were able to get a better idea of what dinosaurs really sounded like.

“What we looked at was one particular vocal behavior that’s present in some living birds, but not most living dinosaurs, but is present in the close cousins of dinosaurs, crocodilians as well as other groups,” Clarke says.

That behavior is taking in air, inflating their esophagus, closing their mouths and activating their vocal organ. Clarke says you can hear that sound in some common birds in the state.

“One of the most common parts of our auditory landscapes here in Austin are the white winged doves, and those guys and pigeons, if you’re in a more urban landscape … they produce these sounds,” Clarke says.

But don’t don’t let this new information ruin your childhood, Clarke says. Larger dinosaurs like the T-Rex still sounded scary. They made a sound called “booming.”

“In the question of T-Rex, there’s not just cooing,” she says. “So if you listen – you can go online and find recordings of crocodilians booming – they make this sound with a closed mouth, and it’s pretty scary. I’m not saying they all sound like gentle little doves.”