Permian Frac Sand: If We Mine It, Will They Come?

When oil prices plummeted, west Texas producers needed a source of sand that was closer to home. 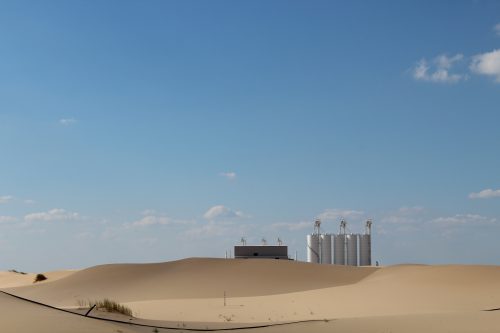 Houston-based Hi-Crush Partners began sand mining operations on July 31. Their plant is located at a former recreation site near the junction of Texas 115.

There’s a natural resource sitting above ground in oil-rich West Texas that’s in high demand this summer. Millions of tons of it, in fact. A field of sand dunes extends 200 miles in a crescent from New Mexico through the booming Permian Basin. Now the oil industry has taken a special interest in this sea of windblown formations.

Outside of a loading facility in Odessa, Texas, Molly Sizer opens up the trailer hatches on top of her red International Eagle 18-wheeler. Her trailer is empty now, but soon it will hold 50,000 pounds of sand. The sand is transported into the facility by rail from the midwest and other parts of Texas. We climb back into the cab and get in line behind several other trucks, waiting to load up under the silos before hauling the sand off to oil well sites. Molly got her start trucking a couple of years ago.

“I realized that it was really quick schooling,” she says, “and so therefore I was in the workforce really quick, and out there making money in a very short period of time.”

She hauls frac sand, a key ingredient in the hydraulic fracturing process. It’s pumped underground at high pressures along with a mixture of water and chemicals to make fractures in the earth. The sand keeps those fractures propped open, which allows oil and gas to flow up to a well.

Joseph Triepke, founder of the research firm Infill Thinking, says that as the Permian Basin has become the epicenter of onshore drilling in the in U.S., the role of sand in the fracking process has become increasingly important. He thinks that looking at the amount of sand pumped per well in the Permian may be a better way to track oilfield activity than counting rigs.

“Now it’s not just about drilling as many wells as we can, we’re actually drilling fewer wells than we used to, but it’s about touching more of the rock underground,” he says.

Transporting sand long distances is expensive – it can cost up to 3 times the price of the material itself. Some producers hope that soon, the sand that truckers like Molly haul to their wells will be locally sourced. And the Permian Basin may continue to see more job openings accompanying what some are referring to as the sand “gold rush.”

According to Clint Walker with the Permian Basin Petroleum Association, the more sand producers pump into their wells, the more oil the wells produce.

Until recently, the industry favored coarse-grain sand for the fracking process, mostly from the midwest. But when oil prices plummeted a couple of years ago, producers began experimenting to find more efficient and cheaper ways to get oil out of the ground. They found that, at least in some formations, using finer sand at higher and higher volumes seems to push out more oil. This shift in industry thinking means the West Texas dunes – dunes that Walker grew up playing in – are suddenly of great interest.

The area’s first, and so-far only operating mine opened on July 31, at a former dune recreation site outside of the town of Kermit. At least a dozen other companies have announced plans to open mines in the area.

Joseph Triepke at Infill Thinking says it’s too soon to tell whether the market is big enough.

“There is a question out there, if we do produce it, will they come? Will they actually buy it and pump it just because it’s there and cheap?”

Triepke estimates that if all of those mines begin operation, they could produce as much as 55 million tons of sand next year. Right now Texas wells use about 17 million tons per year. That’s a lot of extra sand. Which raises the question: how serious are these sand mining companies?

Brent Elliot, a researcher at the UT Bureau of Economic Geology, offers that a lot of the time, “companies will report that they’re establishing sand mines and it’s just to position themselves versus other companies in competing for resource space.”

He notes that less than half of the companies staking territory in the Permian dunes have filed the required permits. He has much lower estimates of local capacity and demand – 2.9 and 5.4 million tons, respectively – and he wants to see more test results that speak to whether this fine sand will work for Permian producers.

“You know, I’m still not completely on board with using the Kermit sands as a frac sand. Because not all sand is created equal,” he says.

According to Elliot, the Northern White sands from the midwest that producers have used for years are, geologically speaking, much older than the Permian sand. They’ve withstood the test of time through life cycles of erosion, making them more durable.

But sand from the midwest is expensive, and sand mining has raised environmental concerns in that region related to the process of digging the sand out from under the topsoil. The west Texas dunes, which sit in loose piles on top of the bedrock, pose their own set of problems. Oilfield geologist Dr. Steve Schafersman says that the dunes are an isolated and unique ecosystem.

“There’s a tremendous diversity of wildlife all sorts of plants and animals that are unique because they are adapted to live in the dunes, that’s their home,” Schafersman says. “They can’t live anywhere else.”

Among them is the Dunes Sagebrush lizard, a rare species that came close to an endangered listing at the onset of fracking in the Permian. The listing was fought off successfully by the oil industry, but the removal of the lizard’s habitat will give environmentalists a stronger edge to protect the dunes in court, in the face of an impending sand boom. Molly Sizer opens her trailer hatches outside of a sand loading facility in Odessa, TX.