“It’s in my blood now. I look forward to spring like crazy.” 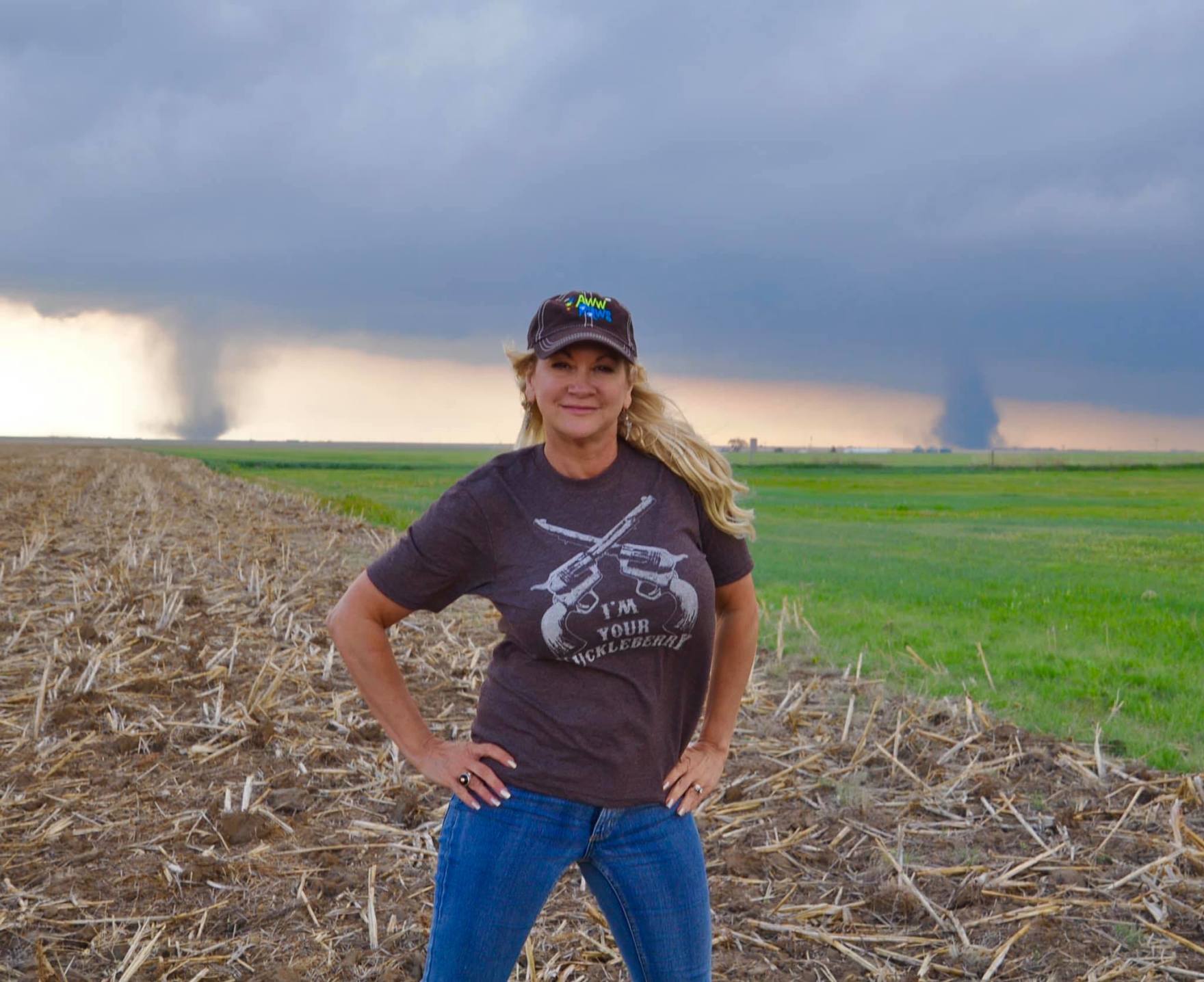 Carrie Cunningham poses in front of twin tornadoes near Cope, Colorado, in 2018

Most people do their best to take cover when severe weather and tornadoes are headed their way. But there’s a group of people who are running toward the storms, known as storm chasers.

Each storm chaser has their own motivation: some are serious meteorologists collecting hard data with scientific instruments; some are thrill-seekers who are looking for the adrenaline rush of seeing a tornado close up; and there’s a growing industry of people who actually make a living bringing tourists to a front row seat to see the destructive power of nature.

It’s April 23, 2021 near Lockett, Texas, and storm chaser Russ Contreras has caught up with a tornado. To Russ, storm chasing is the ultimate hobby. He’s been fascinated by severe weather since he was a kid watching a classic movie.

“The tornado scene in ‘The Wizard of Oz,’ you know, and I remember going outside when I was young and seeing storms come through DFW and I just remember the sky would just turn black, you know, purple, dark purple … the storm was coming in,” he said.

Contreras owns his own pest control business in Carrollton. It gives him the flexibility to pursue his storm chasing hobby. His chase car is a 2012 Ford Escape outfitted with a weather station on top and a mounted laptop inside running specialized radar software, flashing caution lights, extra fuel and a tow rope in case he gets stuck. Storm chasing is hard on vehicles.

“I probably lost about two or three windshields in the last couple of years,” said Contreras. A tornado Near Lockett, Texas, on April 23.

Carrie Cunningham lives in Boerne, Texas. Like most chasers, she also has a lifetime fascination with tornadoes. In 2010, she worked as a media liaison for the government funded Vortex Two project, studying tornadoes up close. After a while, she moved from riding in the back seat to driving and helping deploy equipment. Cunningham talks about her first tornado.

“It was just beautiful and there was something spiritual about it, almost for me. We just felt close to nature,” said Cunningham.

Every spring she and her husband take vacation time and go out chasing across the country with their friend and legendary storm chaser Tim Marshall. Now, she says it’s more about the journey

“Going through the small towns and eating at the local cafes. It’s the whole experience,” she said.

Photography of not just the tornadoes, but structures of the thunderstorms are what gives her enjoyment.

“And when I was about 5 years old, the tornado had gone through Princeton, Texas, and ripped the roof off a high school just a block away from our home. And ever since then, I’d always been really fascinated by severe weather,” said Burns.

His dad gave him the idea to be a professional storm chaser.

“He went on his first chase with me and we saw a few tornadoes that day” he said. “ And he was so fascinated by it. He came back to me about two weeks later and said, Have you ever considered doing storm tours?” he said.

His customers typically have booked their tour a year in advance. They come from all over the world

“It doesn’t matter what anyone’s background is. Everyone has the same common passion and interests. When they sit in the van and finally get the chance to chase their dreams, they feel like family because they’re finally in a place where they’re not crazy!”

Burns says he’s logged about 30,000 miles this year and travels all the way from the border of Mexico to Canada.

“You know, one day a week, like I just said, we could be Wyoming. The next thing would be in Iowa. The next day, we’re back in Nebraska. We’re just constantly chasing the weather pattern” said Burns.

Storm chasers do their best to stay safe in the field, but getting close to tornadoes can be dangerous. In May of 2013, a tornado near El Reno, Oklahoma, killed three professional veteran storm chasers.

By midsummer, the jet stream begins retreating to the north and the weather becomes more stable with less chance of tornadoes. But when the season comes back around, chasers start getting itchy to experience Mother Nature close up.

Cunningham can’t wait till next season.

“It’s in my blood now. I look forward to spring like crazy” said Cunningham.