Fifteen years ago, seven astronauts died when the shuttle was lost over east Texas. 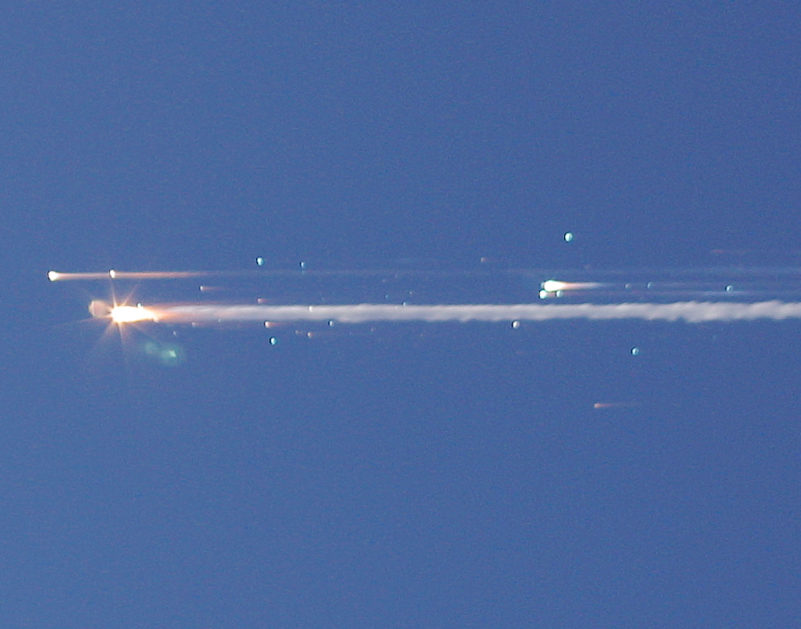 A still image from video taken as Columbia descended over east Texas.

But after communications were not regained with Columbia when expected, it became apparent something was terribly wrong. The shuttle had disintegrated over east Texas skies, killing all seven astronauts on board.

Here are the voices of several Texans whose memories of February 1, 2003 remain vivid, and whose lives were forever changed by what happened that day.

For Laurel Clark, a member of the Columbia crew, it was her first mission. Her husband, Dr. Jonathan Clark, was a NASA shuttle flight surgeon.

“I was at Kennedy Space Center, several miles from the launch site. That’s where I was with my son, so we were all excited, you know, no idea whatsoever that things were going to go awry.”

Evelyn Husband Thompson, the widow of Commander Rick Husband, says her husband left devotional tapes back home for their children to watch every day of the mission.

“On that morning, on February 1, we brought the tapes with us, and so they watched the last devotional tape, and basically Rick said to them, ‘Hey, I’m real excited we’re going to land today and I’m looking forward to seeing you guys and can’t wait to be home. Just told them how much he loved them and how proud he was of them and prayed with them, and so they each watched the tape and we got ready and we headed out in kind of a big convoy over to the landing strip with the families.”

Dr. Scott Lieberman has lived in Tyler for 24 years, and that day, he went out with a video camera and a still camera to photograph the reentry of the space shuttle – not realizing that he would be recording a tragedy.

“My wife realized it first,” he says.

“I remember looking up at the sky,” Evelyn Husband Thompson remembers, “and standing there with some other astronauts and just saying, ‘So, remind me which direction the shuttle’s coming in from and when are we supposed to hear the sonic boom?’ And one astronaut’s a really close friend, Steve Lindsey, held up his finger just to indicate ‘hang on just a second’ and I just at that moment got the worst pit in my stomach, cause I just thought, ‘man, something’s wrong.’ And I just kept looking at the sky and there was nothing and I watched the clock countdown, the giant countdown clock, count down from a minute down to zero. And the clock started counting up. My children had ended up standing next to me. Everybody was really quiet. Oh my goodness. I just knew something was really, really wrong. Laura looked at me and she said, ‘Is daddy okay?’ And I said, ‘I don’t think he is.’”

Listen to more memories of the Columbia crew in the player above.

-How Dr. Clark made it his mission after the disaster to prevent similar scenarios from happening again

Dr. Jonathan Clark is an associate professor of neurology and space medicine at Baylor College of Medicine in Houston and teaches operational space medicine at BCM’s Center for Space Medicine. His wife Laurel was a mission specialist on Space Shuttle Columbia, and Dr. Clark was a flight surgeon for the mission.

-What she admired about Rick

-Why she believes manned space exploration is essential, despite the risks

Evelyn Husband Thompson is a public member of the Texas State Board of Examiners of Marriage and Family Therapists, and lives in Houston. Her daughter Laura serves as a Columbia family representative on the Challenger Center Board of Directors.

-His admiration for the Columbia crew, and space exploration

Dr. Scott Lieberman is a cardiologist practicing in Tyler, Texas. Evelyn Husband Thompson with her children Laura and Matthew, now 27 and 22. Dr. Scott Lieberman poses with the photo he took, used for the cover of the Feb. 10, 2003 edition of Time magazine Monday, February 03, 2003 at East Texas Medical Center in Tyler, Texas. The Cardiologist caught a series of photos during the break-up of the space shuttle Columbia from the backyard of his home with his Cannon digital SLR camera that have been distributed worldwide. Lieberman describes himself as photo and space bug. Tom Worner 2-3-03

Dr. Scott Lieberman of Tyler, Texas photographed the shuttle’s reentry. His photo was circulated through publications across the world, including the cover of Time magazine. Photo of Lieberman by Tom Wormer.