Amber Briggle is speaking out again, after making headlines for inviting the Texas Attorney General to dinner in 2016. Texas Child Protective Services is investigating her family. 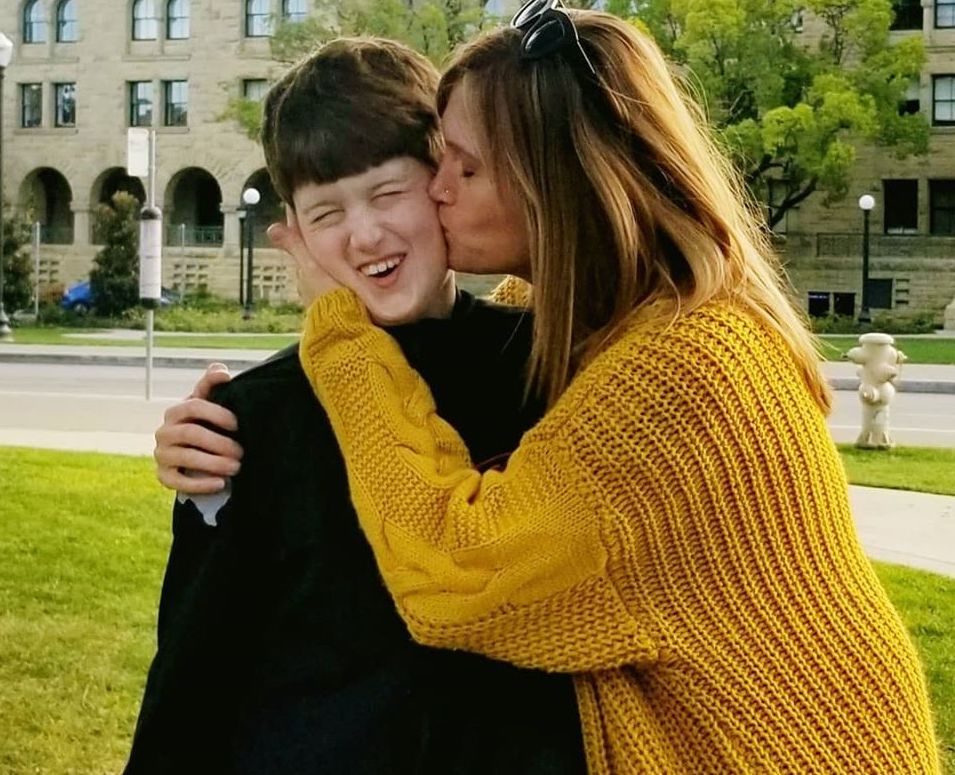 Amber Briggle and her son.

Amber Briggle says her long fight over gender-affirming care wasn’t a choice but her duty. Her Texas family is under investigation after state Attorney General Ken Paxton issued a legal opinion this year saying gender-affirming treatments for transgender children constitutes child abuse. Later, Gov. Greg Abbott instructed the Department of Family and Protective Services to investigate any reported instances of such treatments.

The Briggles are now the target of such an investigation.

“I’m really not great,” Amber Briggle said. “Actually, my hair is falling out, I can’t sleep. It’s not – we’re not good.”

Briggle’s son is transgender. Back in 2016, she told Texas Standard she invited Paxton over to dinner to “put a human face” to the struggle for transgender rights that Paxton was challenging at the time via opposition to public school bathroom guidelines outlined by the Obama administration.

Today, Briggle tells the Standard that the open investigation by Child Protective Services, or CPS, is causing an immense amount of stress, but she and her husband are trying to shield their kids from the details.

“The lead-up to the CPS visit, which actually happened a week ago today, was very stressful and full of anxiety for both of my children,” Briggle said. “But the caseworker came and went and no one got hauled away in handcuffs, and so they feel like — they feel like it’s over.”

Last week, CPS called Briggle at her office and said the agency would be at her home in half an hour to begin an investigation. Briggle immediately hired a lawyer, at great expense, she says. The day she had dreaded had finally come, she thought.

“Texas legislators have been trying to erase trans kids and harm them and break the hearts of loving parents like me for years. And they’re they’re finally doing it,” Briggle said.

RELATED: This mom and her transgender son invited Ken Paxton to dinner. He said yes.

Briggle doesn’t know who reported her family, but ever since she began advocating for LGBTQ and trans rights years ago, she says has felt a “target right on my back.”

She is also disheartened by Paxton’s legal opinion that likely spurred the report against her. Paxton accepted the Briggles’ 2016 invitation for dinner. Amber Briggle says Paxton and his wife brought a home-baked dessert and had a “lovely visit.”

“He sat at my table for 2 1/2 hours, you know, eating, like, carefully prepared food, watching us engage with our children and play musical instruments and tell jokes and do magic tricks,” Briggle said. “He knows firsthand that we are not child abusers.”

But Paxton’s opinion, issued in February, showed Briggle that perhaps her attempt to change his mind about trans rights wasn’t as successful as she had thought.

“My husband and I, in our — in our naïve way, thought we really got through to them,” she said.

One comfort, Briggle says, is knowing that Paxton’s legal opinion is just that – an opinion. Lawmakers failed to pass legislation that would have made it a crime for parents who help their children get gender-affirming care, punishing them with prison time and sending the child to foster care.

Indeed, after Texas Standard’s interview with Briggle Wednesday, a Texas appeals court upheld a challenge to another investigation of a family supporting gender-affirming care for a transgender child.

“I know what the law says. And yet it is terrifying to have a CPS worker come into your home and threaten to take your children away for doing nothing more than loving them unconditionally,” she said.

For parents or others who may not understand gender-affirming care for children, Briggle reiterates that it’s backed by medical groups. The Texas Medical Association, for example, opposes criminalization of parents who help their children get “evidence-based” care. She also says helping her son transition was not a choice.

“At the end of the day, I’m just always going to do what I know is best for my son, like any other loving parent out there. So I’m not sure it’s a decision; it’s just my duty as his mom,” Briggle said.