Underfunded and understaffed, some state veterans homes are turning residents away

Labor shortages exacerbated by the pandemic have left facilities around the country with empty beds, even though veterans are on waiting lists hoping to move in. 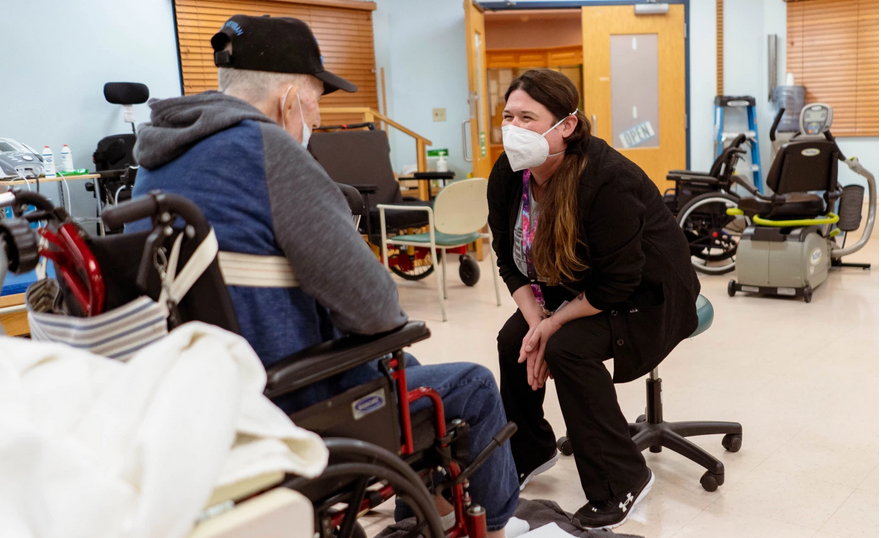 Todd Callahan, a 50-year-old disabled Navy veteran, loves living at the St. James Veterans Home in St. James, Missouri, about 100 miles southwest of St. Louis. He recommends it to his fellow veterans who need care.

“[The staff] is friendly, they’re nice. I get good care here,” Callahan said. “If there is an opening here, that would be good for [a veteran].”

But the St. James Veterans Home is not taking new residents, even though about half the beds are empty. Of the 185 jobs at the home, 75 are vacant, and that means the dozens of veterans on the waiting list can’t move in.

It’s a scenario that’s playing out in many states, and low pay is mainly to blame.

“It’s blatantly obvious that the pay is directly correlated to the staffing issues that we’re having,” said Brittany Ritter, administrator of the St. James Home.

Missouri pays certified nursing assistants between $12 and $14 per hour to work at the home, but other CNA jobs in the area are advertising $19-$20. The seven state run veterans homes in Missouri have seen a 91% turnover in CNAs over the past two years. It’s a national problem, with California, Texas, Kentucky, and Mississippi among the places with similar situations. Every state has at least one veterans home that’s owned by the state government. They get federal funding to pay part of the operating costs, but states are expected to kick in money, too.

“Low levels of state funding and mandates on the level of care give the homes little choice but to serve fewer veterans,” said Heyward Hilliard, president of The National Association of State Veterans Homes.

The group doesn’t have specific numbers to quantify the extent of the problem, but Hilliard said it’s widespread.

“It’s systemic and not getting better,” he said. “And because every state is a little bit different, there has to be 50 solutions.”

In Missouri, the proposed solutions are coming from a few different angles, but they all involve changing the way the state budgets for veterans homes.

State Representative Dave Griffith has proposed dedicating half the state’s gaming revenue to veterans services. That would triple the amount the Missouri Veterans Commission, which oversees the homes and other veterans services, receives each year.

“It would solve a lot of problems for our veterans. Veterans who want to go into a Missouri veterans home have earned that right. And we should not deny them that right,” Griffith told a group of 150 veterans who traveled to the Missouri Capitol to lobby lawmakers.

Currently all of the state’s gaming revenue goes to education, and advocates for that cause are fighting against the proposed change.

Missouri Governor Mike Parson has proposed a 5.5% pay increase and a $15 minimum wage for state employees. That would make veterans home pay more competitive, but wouldn’t close the gap completely.

Some veterans advocates call that effort inadequate to attract workers.

“We had a job fair and had a lot of people graduating from college or moving from job to job in the nursing, CNA, LPN jobs,” said Charlie Gooden, a Vietnam veteran and lobbyist for the Missouri Association of Veterans Organizations. “And they listened rather intently and then it was almost a hang up, like, click.”

While the care at state run veterans homes can vary from state to state, the Missouri recently won “Best in Class” Customer Experience Awards from the Pinnacle Quality Insight company.

St. James Home employees said they’re frustrated that more of the state’s veterans can’t get the care they deserve.

“These veterans treat you like they’re your family,” said Darla Nebel, Activities Director in the Alzheimer’s wing at St. James. “When I first started here I was told if you can’t treat them like your family, then honestly you don’t need to be here, because that’s part of. You have to treat these guys like they are part of your life and part of your family.”

Nebel said she works at the home to serve veterans, and the paycheck is secondary. But state run veterans homes are finding it hard to staff their facilities with people like her.

“Those people end up getting burnt out because they are having to work longer hours,” Ritter said. “They are being mandated to stay. So it’s a vicious cycle with a negative outcome, unless we are able to change that direction.”