The Love Story Behind Tom Lea’s ‘Sarah In The Summertime’

A romantic tale about one of Texas’ greatest artists is expressed in a painting he toiled over for two years after World War II. 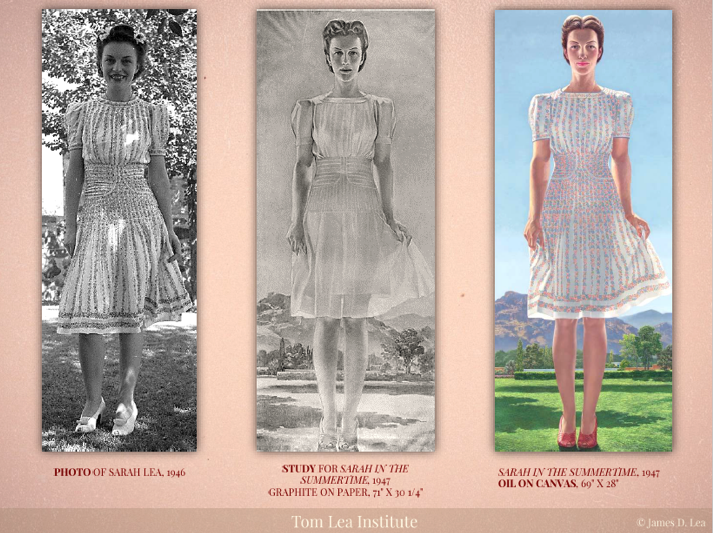 "Sarah in the Summertime," by Tom Lea.

As Valentine’s Day is approaching, I thought I’d share a romantic story about one of Texas’s greatest artists, Tom Lea.  This is a love story, expressed in one painting, titled “Sarah in the Summertime.”  I’ll tell you the story of that painting and how it came to be.

Tom Lea was a true renaissance artist in the sense that he was both a gifted painter and writer. He was a muralist and a novelist. His murals are, to this day, in public buildings in Washington, D.C., El Paso, his home town and Odessa. President George W. Bush had one of his paintings hanging in the Oval Office. Lea’s novels, “The Brave Bulls” and “The Wonderful Country” are considered Southwestern classics.  His two-volume history of the King Ranch can be found in any home with a good Texas library.

Tom met Sarah in 1938, when he was working on his celebrated “Pass of the North” mural in El Paso.  He was invited to a small dinner party where she was also a guest. Sarah was from Monticello, Illinois, and in town visiting friends. He was immediately enchanted by her and decided that evening that he wanted to marry her. Tom had the good sense not to confess to that wish right there. No. He waited until their first date two nights later to pop the question. She didn’t say “yes” until he met her parents. Several months later, they were married. It was a storybook romance that spanned 63 years.

Tom and Sarah were only apart for one extended period of time during their marriage, and that was during World War II, when he was an artist for Life Magazine, embedded with the U.S. Navy. He documented the realities of the war in drawings and paintings, the most famous of which was “The Two Thousand Yard Stare.” Naturally, Tom missed Sarah terribly every day.

Here I will let the famous novelist take over the narration. He wrote:

I had a snapshot of Sarah which I carried in my wallet during the whole war. I looked at it, homesick, all over the world. When the war was over, the first painting I began was a full-length, life-size portrait of Sarah in the same dress, the same pose, the same light as the little snapshot.

I worked a long time making a preliminary drawing in charcoal and chalk, designing the glow of light and the placement of the figure against a clearness of blue sky, the mountains like Mount Franklin, the leafy trees and green grass and summer sunlight, before I transferred the drawing to the canvas. It was a detailed and precisely measured drawing. For instance, Sarah’s height of 5 foot 6 in high heels was drawn on the canvas exactly 5 ft 6. The painting was done with devotion and without haste. First the background, then the figure, and finally her head. I remember that I worked 26 days painting the pattern of all the little flowers on the dress. … 2 years after I began work on it, longer than any other painting ever took me, I signed it framed it and gave it to Sarah. I see it everyday in our living room and I see Sarah [too]. 20 years have passed. “Sarah in the Summertime” means more to me that I could ever put on canvas.

Adair Margo, his agent and decadeslong friend, and founder of the Tom Lea Institute, told me that Tom Lea would never let that painting leave the house, not for any showing or exhibition. Only once was she able to convince him to put it in a local exhibit, but only for a few hours, and it had to be back that night.

Tom and Sarah are buried side by side in the Texas State Cemetery in Austin. There’s one headstone with divided inscriptions for each. On Sarah’s side it says, from Tom, “Sarah and I live on the east side of the mountain. It is the sunrise side. It is the side to see the day coming. Not the side to see the day is gone. The best day is the day coming, with work to do, with eyes wide open, with the heart grateful.”