‘Do something!’ Biden is urged as he leaves Uvalde church

Facing yet another community grieving after a mass shooting, the president replied, ‘We will.’ But Congress hasn’t managed to change gun policy for decades. 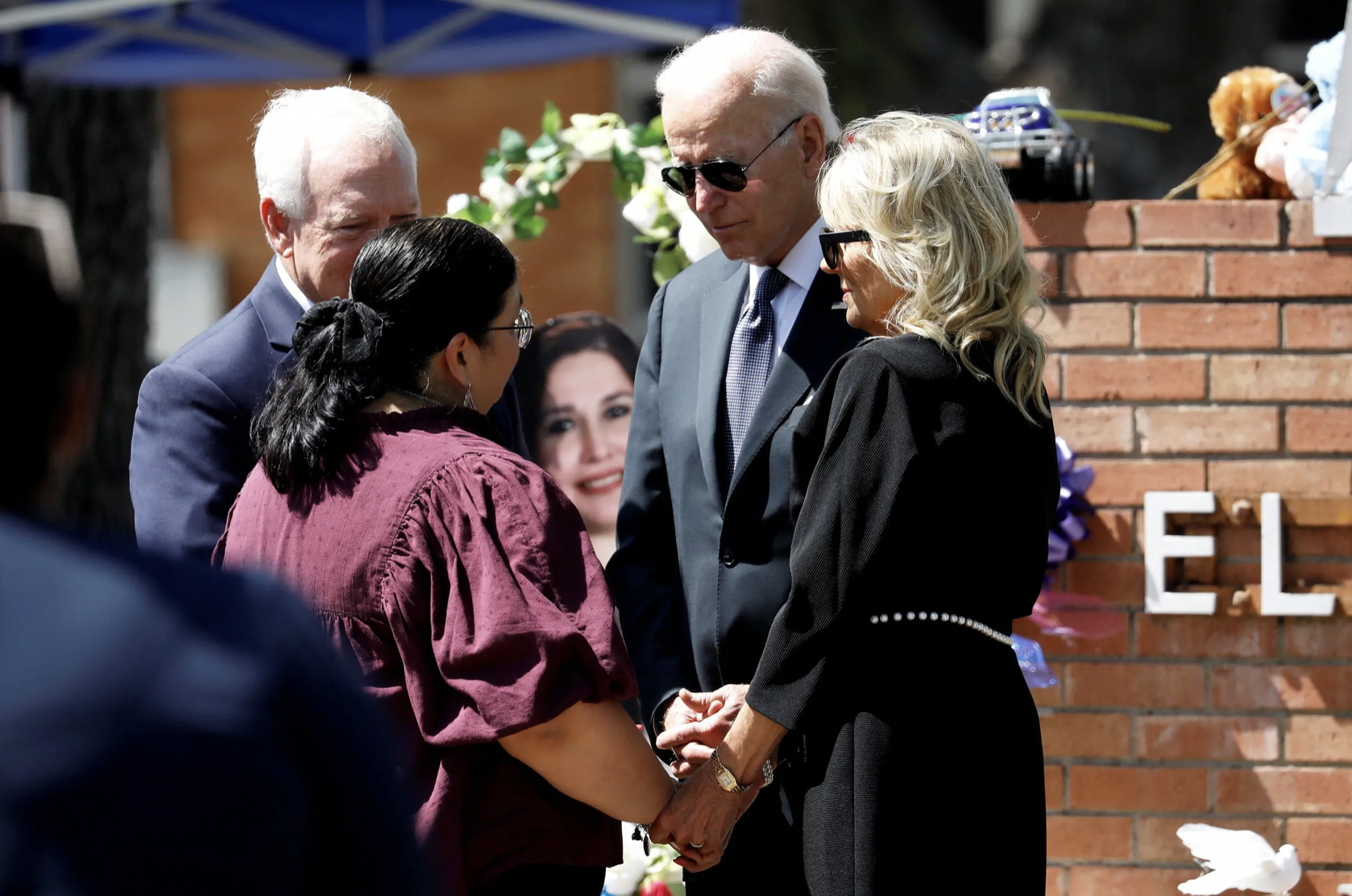 Only 12 days after visiting a community center in Buffalo, N.Y., following a mass shooting that claimed 10 lives at a supermarket, President Joe Biden and first lady Jill Biden arrived in Texas on Sunday morning to console victims of the deadliest school shooting in Texas history.

After landing at Kelly Field in San Antonio, the Bidens flew to the South Texas town of Uvalde, a majority-Latino community of 15,000 where 19 schoolchildren and two educators were slaughtered on Tuesday at Robb Elementary School.

While leaving a mass service in the town, a spectator called out to the president to “Do something!”

“We will,” Biden replied.

Biden stopped to read the victims’ names and touched some of their photos. While there, he wiped away a tear.

When Abbott arrived at the school, one of the spectators shouted: “We need help!”

On the way to celebrating Mass at Sacred Heart Catholic Church, the Bidens encountered Texans along the route. One man held up a “Uvalde Strong” sign, while another woman held up a blue and white flag with the word “BORDER” written across the top.

“Our hearts are broken,” San Antonio Archbishop Gustavo García-Siller said at the Mass on Sunday.

The church service focused on the children of the 600 parish members in attendance. In both English and Spanish, García-Siller told the Uvalde children they would help their community heal.

Later in the afternoon, the Bidens met with victims and survivors of the shooting and with first responders.

Despite Biden’s promise to act, it remained far from clear whether Congress would do so.

As several federal and local Texas officials appeared on Sunday news shows, the lack of agreement on how to solve the problem, or even what the problem is, was readily apparent.

When asked on NBC’s “Meet the Press” on whether the country has “a gun problem or a security problem,” Roland Gutierrez, a Texas Democratic state senator who has been outspoken in favor of gun reform, was definitive.

“This is absolutely a gun problem, and it’s all of those things,” he said. Abbott thinks it’s a mental health problem. Sure it is. Well, then go fund it properly. We’re dead last in mental health funding in the United States. You know, we’ve got a crisis of infinite proportions in these United States.”

He added: “At the end of the day, if we don’t have accessibility to militarized weapons, this doesn’t happen, just like it doesn’t happen in the rest of the world.”

But when asked the same question on CNN’s “State of the Union,” U.S. Rep. Dan Crenshaw, a Houston Republican, said, “No. I think, culturally, we’re a country that has long had a Second Amendment that believes in the right to self-defense.”

“I don’t think it’s a problem that I own guns. And I know that, if I destroyed all my guns, it would have zero effect on crime.”

He went on to say he wouldn’t support a series of proposed policies to limit the purchases of guns, which is likely an indicator of where most Texas Republicans stand.

Crenshaw said he would not back a federal red flag law — which permits police or relatives to petition to restrict gun access to people with mental illness — saying it should be up to local government. But when asked if he would support a state red flag law, he said he opposed that as well.

Additionally, Crenshaw said he opposed universal background checks and eliminating what is known as the gun show loophole. And while he did not directly answer a question about raising the age to purchase a firearm from 18 to 21, Crenshaw deliberated over what constitutes an adult under the law and suggested that the legal limit on buying a gun will continue to go up based on the ages of future mass shooters.

“I’m not very impressed by our current swathe of 18-year-olds and their maturity level, so maybe we should have that conversation. But then it has to apply broadly. It has to mean that you’re not an adult until 21. And then what happens then?”

In the U.S. Senate, John Cornyn, a Texas Republican, and Chris Murphy, a Connecticut Democrat, are leading negotiations over potential bipartisan action.

U.S. Sen. Richard Durbin, the Democratic chairman of the Senate Judiciary Committee, blessed the negotiations. “Do the right thing and do as much as you can do,” he added. “And let’s join together, if we can, on a bipartisan basis to show the American people that what happened in Uvalde was not in vain.”

Earlier on Sunday, the U.S. Department of Justice said it would review the law enforcement response to the shooting, which has been faulted for being slow and ineffectual. “I’m disgusted by all of it,” Gutierrez said on CNN’s “State of the Union.”

Uvalde County Commissioner Ronald Garza said on CBS’s “Face the Nation” that he was “still in the dark” over the slow law enforcement response to the shooting.

“We do welcome the investigation,” he said of the Justice Department review.