David Bowie Took the Name, and the Street Sign, of This Texas Icon

As of Tuesday morning, the Bowie Street sign has been restored, but some Austin residents are pushing to permanently change it back to David Bowie Street. 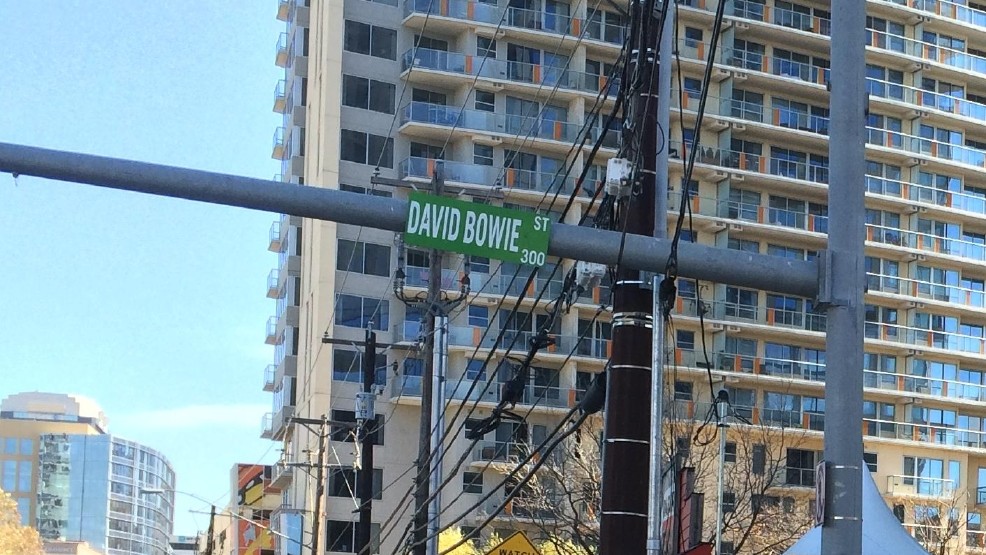 As you made your way up Austin’s West 5th Street in the past few days you may have noticed a little ch-ch-change in street signage. Woe be to the vandals of such an affront to city property.

I stopped a few passers-by to gauge their reaction:

“I wouldn’t consider it as vandalism. It’s a tribute.”

“I was born and raised here and love David Bowie and I think it’s a perfect city for it. And it’s a tiny street, too. Why not? It’s only a couple blocks long. Why not?”

Austinites of all types walking the streets of downtown seem to be in agreement that the city should allow for a little fun in the name of its own reputation. This week a couple of local rapscallions took it upon themselves to alter the official green city street sign of Bowie Street to read “David Bowie Street” in commemoration of the influential artist’s recent passing.

“The (Austin) Transportation Department was notified this week that someone got a little creative with the street sign at 5th and Bowie Street in Downtown,” said Cheyenne Krause at a press conference.

“We’ve decided to leave the sign up until Tuesday, January 19th so our community and neighbors can enjoy the makeshift memorial,” Krause said. “At that time we will take it down; we have to replace it with the real street name sign.”

The ATD isn’t entirely alone. Not every citizen out there agrees the modification is the appropriate thing to do either.

“I wouldn’t agree with it. You know I agree with American History and don’t feel it should be overwritten,” says Gary, who requested we only use his first name.

He’s not so sure renaming the street is such an honorable act no matter what the sentiment.

“Well, it’s a pioneer that it was named after and not exactly an artist,” Gary says.

That would be James, or Jim, Bowie. The city named the Austin street after this Bowie sometime around 1900. His history is both beloved and controversial in Texas. Jim Bowie was a legendary 19th-century Texas pioneer and Alamo defender who also happens to take credit for creating the renowned “Bowie Knife.”

It also must be noted that Jim Bowie may have dabbled in slave trading and had at least one knife fight in which he killed another man. Therein lies the controversy for some. It would arguably be a valid enough reason for allowing at least a little portion of the street to be renamed in honor of that other Bowie guy.

Austin resident Chris Chipman looks at it this way: “Jim Bowie is memorialized on schools, monuments, buildings, streets, rivers, towns! Everywhere across the State of Texas. This is a two-block-long street in the city of Austin,” he says. “I think it’s fitting, beautiful and the greatest thing the city could do.”

And yet for those of you still looking for a relevant David Bowie connection in all of this – and why the Thin White Duke even deserves such an honor here – there certainly are a couple of note.

Bowie left and indelible mark on the local late guitar hero Stevie Ray Vaughan. Vaughan had said that the notoriety he received from playing on the 1983 hit single “Let’s Dance” was a highlight in this career and gave the aficionado serious new international acclaim.

“David Bowie was inspired to change his name to match the Bowie Knives,” Cheyenne Krause says. “Bowie Knives are named after Jim Bowie, which is what our street sign is. So, (the people who changed the signage) are kind of honoring both in a weird kind of way.”

Until recently, the artists who changed the sign remained a mystery. But the headquarters of SXSW, being on the very street in question, allowed for strong speculation that their downtown headquarters were somehow involved in the caper.

Regardless of numerous denials at first, both Roland Swenson, Co-founder and Managing Director of SXSW, and Jason Carter, friend of Swenson’s and owner of sign shop Wicked Signs in Austin, eventually fessed up to the stunt. They said they didn’t want to waste tax-payer money on a costly police investigation, so they admitted their complicity in the whole affair.

But it was all in good fun, Swenson says.

“It’s been fun to go out this week and just watch the people with big grins on their faces, taking selfies and taking pictures of the sign,” Swenson says. “There’s been camera crews every day. You know it’s the only part of this whole thing that’s made me smile – David Bowie Street.”

I nudged Swenson on his feelings about David Bowie’s art, music and how the rock icon affected his life.

“It’s comparable to when John Lennon died for a lot of people,” Swenson says. “He was really important to a lot of kids who were alienated, sexually ambivalent, didn’t fit in. David Bowie speaks to them.”

Although the David Bowie Street sign is being removed Tuesday, there’s already a petition in the works created by local activist and Khabele High School student Kristainne Swenson to make the change a permanent one.

The petition has already garnered over 3,500 signatures, but Swenson says it’s not as simple as presenting a petition to Austin City Council for any real change to occur.

Changing a street name is a lengthy process, but Kristainne Swenson says she’s confident that if the right forms ever made their way to City Hall, there would be resounding support in changing the street’s name.

“It’s not too outlandish to ask to honor a great musician,” she says. “Jim Bowie was a really important part of Texas history. But somebody commented on my petition that the name Bowie should remind us of heroes, not giant knives, which I think is pretty accurate.”