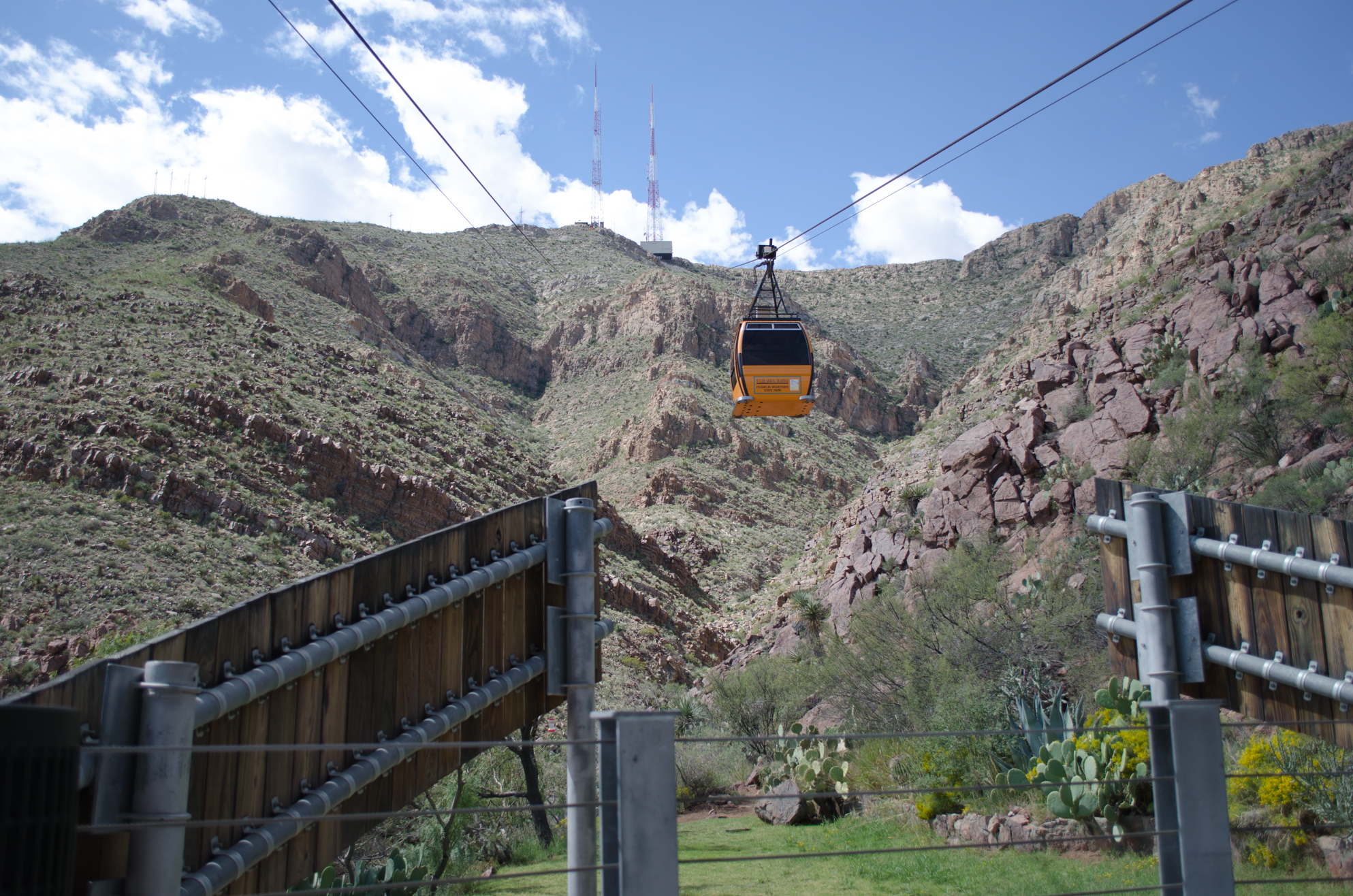 The Wyler Aerial Tramway is one of the most popular attractions in El Paso. The nearly 60-year-old tramway takes visitors up the side of the Franklin Mountains on a thick cable. The tramway was closed to the public last month after an engineering report found it needs significant upgrades. Currently, only equipment is allowed in the tramway.

For nearly six decades, the Wyler Aerial Tramway in El Paso has been the only tramway in Texas. It has glided on 2,400 feet of thick cable, taking people to the top of the Franklin Mountains. The tramway was originally built for a private business, but opened to the public nearly 20 years ago, becoming a popular attraction for thousands of visitors from around the world. Then last month, the Texas Parks and Wildlife Department closed the tramway indefinitely, after engineers discovered it needs costly upgrades and repairs. And now the tramway’s future dangles in limbo.

The mustard-colored gondolas of the Wyler Aerial Tramway sway in the wind on the cable that leads them to the top of the mountain.Just weeks ago, they took people on a five-minute ride over cacti, rock formations and a giant canyon. The tramway ends at an observation deck on Ranger Peak.

Franklin Mountain State Park Superintendent Cesar Mendez is one of just a few park employees left at the tramway’s base, since it was suddenly shut down in mid-September.

But folks like Jacob Lyon and his family from nearby Monahans are still showing up, only to find a sign on the gate that reads “closed for maintenance.”

“Drove all this way to find out it was closed,” he says.

The state made the abrupt decision to close the nearly 60-year-old tramway last month after an engineering report found it has been operating past its life expectancy.

Park Superintendent Mendez says replacing it would be a multi-million dollar project. And that’s out of the park’s current budget. He says the state is still figuring out what to do.

“You cannot just order a new one. I mean all this has to be designed completely from scratch,” Mendez says.

The old custom-made tramway is also a piece of El Paso’s history. It was built in 1959 by a man named Karl Wyler. He owned local television station KTSM, and had the tramway built so technicians could service the TV towers at the top of the mountains.

Eric Pearson remembers riding the cars to the top as a young photographer at KTSM.

“If you’ve never been to the top, there is something great,” Pearson says. “There is a single track razor sharp cliff that drops down the crest of the mountain and you’re right on top of that looking, like I said, you’re looking eye level with peregrine falcons who are soaring above the desert.”

Mendez says it went through four years of renovations before visitors could ride it.

“And at that time gondolas were custom made in Switzerland and everything was put in place. It got a complete uplift. And then in 2001 it opened to the public,” Mendez says.

Mendez says the tramway quickly became one of the most popular attractions in the city — about 45,000 people rode it last year. But it has also required a lot of upkeep and maintenance.

Matthew Austin is the site superintendent for the tramway.

“For compatibility reasons once you repair one thing, subsequently you got to repair some of the other things. It’s an aged system so that was kind of the requirement,” Austin says.

Now the tramway’s fate comes down to whether Texas Parks and Wildlife can find the money to replace the system.

State Rep. Lina Ortega, whose district includes the tramway, says she and other delegates are meeting with Texas Parks and Wildlife officials this month to discuss options. But Ortega says she knows it will be a long process.

“That’s why I kind of have a sense of urgency,” Ortega says. “I’m sure as well as the other members of our delegation that we work on it now to get the funding and to get it reopened.”

Park officials say it’s unlikely the tram will open to the public anytime soon. The priority now is to get it secure enough for its original function – so technicians can reach the towers at the top of the mountain.