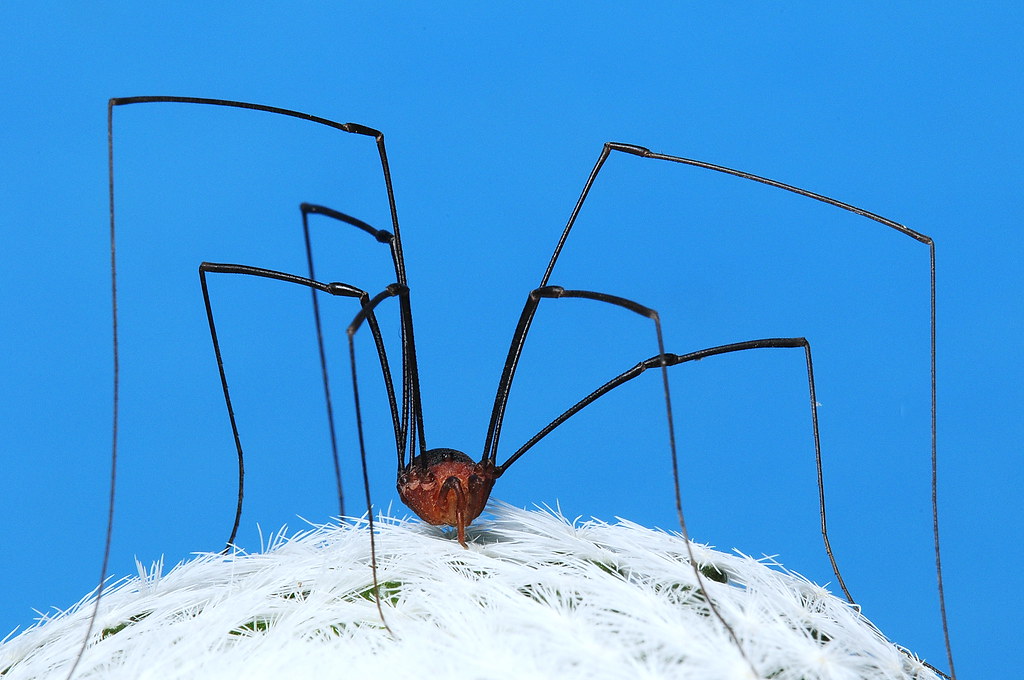 Harvestmen are arachnids but not spiders. They are more closely related to scorpions.

Harvestmen, also known as daddy longlegs, are ubiquitous. Everyone can recognize their pebble-sized bodies and disproportionately long legs. Wizzie Brown, an insect specialist with the Texas A&M AgriLife Extension Office, says there’s more than meets the eye when it comes to these arachnids, and we definitely shouldn’t be  afraid of them.

Why Harvestmen are not spiders:

They are more closely related to scorpions than they are spiders, so you can tell the difference … if you think about a spider, they have kind of a constricted area between the two sections of their body; harvestmen do not. Theirs are broadly joined so it just looks like an oval body shape with all these legs coming off.

The way Harvestmen eat is different from spiders:

They have fangs, so they can use those, and they can bite, but they don’t produce venom. Instead of feeding, like a spider does – when a spider feeds they inject venom into their prey and that helps to break it down. But with harvestmen, since they don’t have venom, they essentially will grab their prey while it’s alive, or they’ll scavenge something that’s dead, and they will just kind of masticate it with their fangs and eat it that way.

Where to find harvestmen, and why they’re never alone:

Typically found outdoors, of course, they do need moist environments, so they’re usually going to be under rocks or mulch – kind of hidden locations. They don’t like being in full-sun areas, so if they are up on the house or structure some place, they’re typically in a shaded spot that’s protected. … When you see them in those areas you’ll actually see clusters of them, and scientists think that those clusters could either help them, make them look larger so they don’t have predation occurring, or it could help them from desiccation, which would be drying out.

When they are approached by a predator they will vibrate their body really quickly and it kind of gives them this throbbing look. … They can actually break off their leg, or part of their leg between two sections of it, and that way they can escape.

Why you shouldn’t be afraid of them:

Don’t be paranoid about them; they’re not going to kill you. Even though, like my mother, your mother probably said that they did.