“A majority of the workers walked off, leaving the factories almost empty. And they waited it out.” 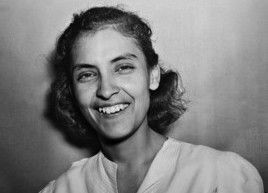 In 1938, San Antonio was the biggest pecan-producing city in Texas. But the people who shell the pecans worked for little pay in harsh conditions. Workers were making $2-3 dollars a week and the brown dust from the shells settled in their lungs like coal dust, creating disease.

So on Jan. 31, 12,000 pecan shellers went on strike – organized by a 21-year-old Mexican-American named Emma Tenayuca.

The shellers won a pay raise through the strike, although nut-cracking machines replaced them a few years later. But Tenayuca’s work in organizing and civil disobedience echoes through the efforts of people like Cesar Chavez and Dr. Martin Luther King, Jr. She was known in some circles as the “passionate one from Texas.”

Tenayuca died in 1999. Wednesday would have been her 100th birthday.

Sharyll Tenayuca, Emma’s biographer and niece, wrote about her aunt’s life in “That’s Not Fair! : Emma Tenayuca’s Struggle for Justice“. She says she knew nothing of her aunt’s notoriety when Emma first moved to Texas from California, where she had moved to get away from her past.

“It wasn’t discussed and I had to learn about it by reading about it in the paper,” she says. “I was fascinated, I was awestruck and I was even a little scandalized because I realized the reason it was a secret was because she had been a Communist back in the day. And that was something that wasn’t discussed because there was still some stigma around that word.”

“She joined the communist party because, at the time, their philosophy was backing labor and was supporting the ideals that she believed in. She never became disillusioned with the party politically but she never lost her commitment to their ideals.”

“She was a senior in high school, she might’ve been 17 years old. She read about the Finck cigar strike in the newspaper and just in sympathy for the women she went to observe and she ended up being arrested along with the women who were out on the picket line. And it was learned then that she had a talent for organizing. And she perfected her Spanish and wrote circulars in English and Spanish. So that began her 10 years of activism in organization in San Antonio.”

On the Pecan Shellers Strike:
“A majority of the workers walked off, leaving the factories almost empty. And they waited it out. … The employers thought they would be back within a couple of days, but since they had organized and figured out ways to feed the families by organizing soup kitchen and things like that, they finally were forced to capitulate and meet some of their demands in terms of wages.”

On the riots at a Communist party meeting:

“It was supposed to be a very small meeting, but the press had just kind of whipped the public up into a frenzy. That was a small local meeting of the communist party where they were going to talk about the party platform. Nothing significant was going to happen at the meeting, it was just a meeting. But about 5,000 people rioted. They were waiting there with bricks and rocks. And when they led Emma and the people at the meeting off to safety, the people just attacked the building. They set fire to the curtains. They broke windows. They just destroyed the building.”

On Tenayuca returning to Texas as a teacher and not speaking about her past:

“After so much notoriety and so many missed meals and not being able to get a job or not being able to get a decent job, she just wanted to work in peace and quiet. And we respected that. One thing she could not resist, though, was a student who was writing a paper about history. And so eventually when people rediscovered her – when people learned that she had quietly returned and people started including her in their thesis and things like that, then she was honored.”