Texas’ seven freshly elected members of Congress run the ideological gamut, from impassioned conservatives to some of the most progressive members ever sent from Texas. WASHINGTON — Texas’ seven freshly elected members of Congress run the ideological gamut, from impassioned conservatives to some of the most progressive members ever sent from Texas.

The new members will be in Washington for the next few days for freshman orientation, where they will learn the ins and outs of legislating — and how to be reliable foot soldiers for their parties. Neither of Texas’ Senate seats were up for election this year.

Each new class of lawmakers brings a fresh set of faces to the Texas delegation. But this class will be replacing some longtime members who had become lasting figures for their constituents and on Capitol Hill.

The members include five Republicans and two Democrats from across the state. Texas’ delegation is made up of 38 members. 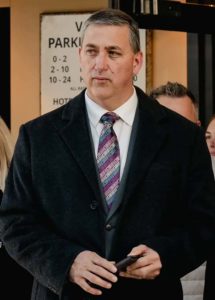 U.S. Congressman-elect Nathaniel Moran at the Hyatt Regency Washington on Capitol Hill on Nov. 13, 2022.
Shuran Huang for The Texas Tribune

Moran ran on his experience leading the county of over 200,000 people through the COVID-19 pandemic, during which he ordered residents to stay at home in the early months while warning about economic challenges to come. He decreased the county’s property tax rate to help accommodate the economic challenges and pushed for businesses to stay open while consulting with medical professionals to take “appropriate precautions.”

That experience cemented his belief that local governments know what’s best for their communities, and his platform reflects that deference for local control in areas from public health to education. He hopes to serve on the high-profile Ways and Means Committee “in order to cut taxes and reduce regulations,” he said in a statement to The Texas Tribune. The committee is the oldest in Congress and one of the most exclusive.

Moran received an endorsement from former President Donald Trump and he ran on a platform closely in line with the Trump-era Republican party, including support for law enforcement, strengthening the border and limiting abortion access.

The district is among the state’s most reliably Republican, and Moran won the seat with over 70% of the vote. Perhaps the most conservative of the incoming members, former Collin County Judge Keith Self will represent the 3rd Congressional District, left vacant by U.S. Rep. Van Taylor, R-Plano, who withdrew from the primary election runoff this year after admitting to having had an affair. Self was the runner-up in the district’s five-candidate Republican primary.

Self ran on what he cast as an imperative for a Christian moral compass. In an interview with Collin County’s Local Profile, Self cited “war on energy, the open border policy, drugs and the decline of morality” including the “proliferation of drag queen shows that target children” as the biggest challenges facing Texas. Self declined an interview during new member orientation, owing to his packed schedule, and he turned down an offer to speak Sunday as he headed to church.

Self’s district was recently redrawn to be more safely Republican. The new district lines became much more rural, cutting out some of the more suburban areas northeast of Dallas. The district went from a 67% white-majority district that voted for Trump with a 1-point margin in 2020 to one with a 71% white majority and a hypothetical 14.4-point margin for Trump if the current district lines had been in place in 2020.

Taylor also has a record as a staunch conservative, going back to his days in the Texas House and Senate from 2010-2019. He carried the district in the Republican primary with 49% of the vote to Self’s 27%. When U.S. Rep. Kevin Brady, R-The Woodlands, announced he would be retiring from the seat he’s held for over 25 years, Republicans clamored in a competitive primary to replace him. Morgan Luttrell, a former Navy SEAL, came out victorious, armed with an endorsement from House Minority Leader Kevin McCarthy and former Texas Gov. Rick Perry (he was appointed special adviser to Perry when the former governor became energy secretary).

Those establishment bonafides led to complaints among some more right-wing primary opponents that he would be too moderate. But Brady was a widely respected member on both sides of the aisle in Congress, serving as the top Republican on the highly influential Ways and Means Committee. The district was also redrawn reducing its Republican majority, changing it from a district that Trump won by 42.4 percentage points in 2020 to one he would have won by 27.1 points.

Still, both the district and Luttrell alike are staunchly conservative, and the congressman-elect’s campaign platform was filled with Republican talking points on preventing illegal immigration, abortions and “radical classroom indoctrination.” He declined to sit for an interview, owing to the hectic schedule of programming this week.

His past resume also falls in line with several Republican priorities. At Perry’s Energy Department, Luttrell worked in the Artificial Intelligence and Technologies Office with an eye toward keeping U.S. industry globally competitive. He was also driven to health care technology innovation after experiencing a traumatic brain injury during a training-related helicopter crash. After years of trying to break into Democratic territory in South Texas, Monica De La Cruzwill serve as the first Republican from the 15th Congressional District. An ardent Republican who was endorsed by Trump, De La Cruz led the way for a Republican effort to flip South Texas on a platform of border security reform and a hard-line stance against abortion.

De La Cruz said in August that she hopes to be a leader on sensible border policy that increases resources for border patrol while also adding more immigration judges and increasing legal pathways for immigrants. She said the House committees on Agriculture, Small Business, Financial Services and Energy and Commerce would be particularly relevant to the district.

De La Cruz hasn’t expressed a hope to join any specific caucuses, but she’s been keeping a much more conciliatory tone since winning her election, mindful of the strong Democratic presence remaining in her district. She went as far as inviting her progressive opponent, Michelle Vallejo, to join her side.

De La Cruz is a political novice, coming to Congress as a State Farm insurance agent without any history in elected office. But she performed much better than expected in her first run against U.S. Rep. Vicente Gonzalez in 2020 with a skeleton crew and less than half the cash of her then-two-term opponent, losing by about 3 percentage points. Her near-win that cycle inspired the runs of two fellow Republicans — her insurance client and friend Cassy Garcia in the 28th district and former member of her 2020 campaign Mayra Flores in the 34th district. Both ended up losing their races this cycle. U.S. Congresswoman-elect Jasmine Crockett after a press conference with other incoming Congressional Progressive Caucus members at AFL-CIO’s headquarters on Nov. 13, 2022. Shuran Huang for The Texas Tribune

State Rep. Jasmine Crockett, D-Dallas, will represent the Dallas-based 30th Congressional District, a seat occupied by Democrat U.S. Rep. Eddie Bernice Johnson since 1993. A proud progressive, Crockett was among the Democrats in the Texas Legislature who fled Austin to Washington, D.C., in July to deny a quorum to Republicans seeking to impose new voting restrictions.

Crockett is eyeing the House Financial Services and Oversight committees, owing to her experience in the Texas House Business and Industry and Criminal Jurisprudence committees, as well as Dallas’ considerable income inequality. She is also eager to push for a clean energy transition to combat climate change but stay in the vein of other Texas Democrats who also keep their fingers on the pulse of oil and gas workers who could be left behind in a move to renewable energy, she said in an interview during a Congressional Progressive Caucus event Sunday.

Despite her progressive bonafides, she said she is acutely aware that many of her constituents do not view themselves that way. Many of her policy ideas got warm receptions among voters, including expanding Medicaid access, switching to clean energy and guaranteeing access to abortions. But she doesn’t want to be labeled as a member of the “Squad” of progressive members, like U.S. Rep. Alexandria Ocasio-Cortez, D-New York, who have rattled the status quo among their party by clashing with Democratic leadership.

“I want to make sure that I go in and I have my own identity. When you go in and you specifically say, ‘hey, I’m a squad member,’ then you’re kind of put into a specific kind of box,” Crockett said. “I don’t think that you can put a Texan in a box.” Crockett isn’t the only progressive heading to Congress. Greg Casar is another outspoken future member of the Congressional Progressive Caucus and will replace U.S. Rep. Lloyd Doggett, D-Austin, who ran in the newly created 37th Congressional District based in Austin.

A longtime labor organizer, Casar hopes to join the House Education and Labor Committee and continue a history of pro-worker policy from Texas Democrats going back to Lyndon B. Johnson, who also represented Austin in Congress. Some of his policy goals include raising the federal minimum wage and working for a bipartisan bill to secure permanent residency for DACA recipients.

Casar is currently an Austin City Council member, where he had a major role in pushing the minimum pay for city staff from $7.25 per hour to $15 per hour. He also organized with Austin tenants to prevent evictions during the pandemic and stood by Starbucks workers as they unionized in Central Texas.

“A vast majority of people in Texas and across the country believe that we should raise the minimum wage from starvation at $7.25 to at least $15 an hour and that everyone should have the right to a decent union job,” Casar said. Long before running in his Houston race this year, Wesley Hunt was a rising star within the Texas Republican Party. Hunt came 3.3 percentage points of unseating incumbent U.S. Rep. Lizzie Fletcher, D-Houston, in the 2020 race for the 7th Congressional District. Republicans kept that near victory in mind when drawing the new 38th Congressional District, which the Army veteran won handily this year.

Hunt is gunning for a highly coveted seat on the House Energy and Commerce Committee — an extremely powerful committee with a wide-reaching mandate that rarely accepts freshmen members. During an interview Monday, he refused to entertain serving on any other committees.

That could be a hard get for someone fresh to Washington who has no experience in elected office. But if a freshman were to get it, Hunt can still make a compelling case. The entirety of the Houston energy corridor lies within his district, and he plans to make energy his top policy priority in Congress. Fletcher is also a significant voice on energy issues, closely aligned with some of the world’s biggest oil and gas interests, and Hunt said he would be eager to work with her on sensible, bipartisan policy that would help the U.S. outcompete adversaries on energy while still protecting domestic jobs.

Hunt, who was also endorsed by Trump, aligns himself with the right-wing House Freedom Caucus and admires several of its members. But he was noncommittal on whether he would join their ranks, not wanting to put himself in a “box.” He would also be one of the four Black Republicans in the next Congress and the only one from Texas.

Disclosure: State Farm Insurance has been a financial supporter of The Texas Tribune, a nonprofit, nonpartisan news organization that is funded in part by donations from members, foundations and corporate sponsors. Financial supporters play no role in the Tribune’s journalism. Find a complete list of them here.