There are thousands of different species of robber flies with different variations. But one tell-tale characteristic will help you spot these (mostly) beneficial insects. 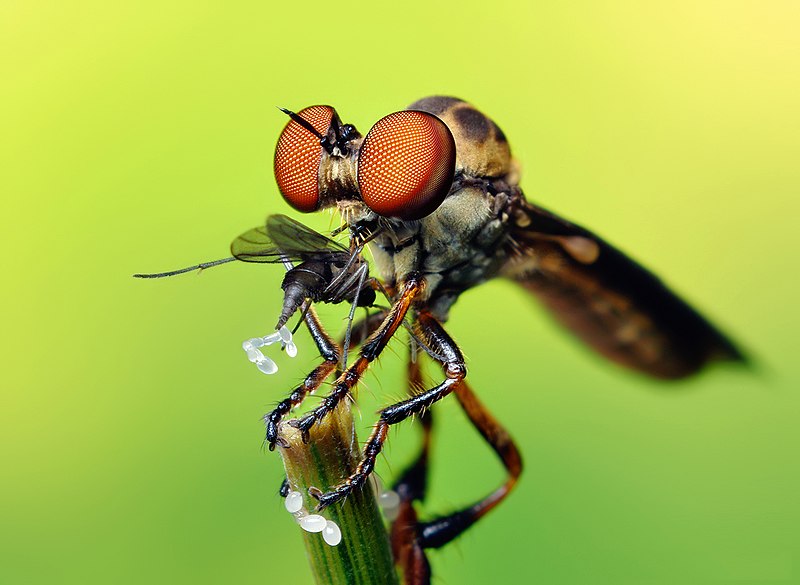 A robber fly with prey.

Robber flies are in the family Asilidae. There are about 7,000 species worldwide and about a thousand in North America.

Entomologists consider them to be beneficial because they eat other insects. But they are “opportunistic predators” – which essentially means they’re going to eat whatever they can come across.

“And unfortunately, sometimes it’s not necessarily the insects that we want them to eat,” said Wizzie Brown, a program specialist with Texas A&M AgriLife Extension Service. “Some of them I’ve seen eating butterflies. Sometimes I’ve seen them eating bees. So we have to take the bad with the good.”

Robber flies vary in size from small to large, are hairy and come in different colors – but most often a shade of brown, gray or black, Brown said. They also have an elongated abdomen and very large eyes to find their prey.

“So robber flies have these big eyes, and they have this divot in between their eyes. It looks like somebody took a like a little tiny frying pan and turned it on its side and just smacked them between the eyes, and it just pushed this little divot down between their eyes,” Brown said. “And then they’re also going to have, I’m going to say, fairly long, hairy – or maybe bristly would be a better word – legs that they use to capture the prey that they’re going to feed on.”

The larvae of robber flies are also predacious, feeding on things like insect eggs, caterpillars or soft-bodied insects, Brown said. And while the larvae live in the soil or sometimes decaying organic matter, like rotting logs, adults can be seen flying around or hanging out in a “perching area” to scout out prey.

“And when it sees something that it wants, it’ll take off flying, catches the prey while it’s flying, and it’s kind of in its little, you know, basket of bristly legs, and they have these really wicked-looking mouthparts. So they will stab the prey item with those mouthparts,” Brown said. “Let’s just say it caught a beetle of some sort. It’ll inject it into the beetle, and that will actually paralyze the beetle. And then it also starts to break down the body tissue of that beetle, kind of making it all liquefy. And so it’s all soupy and goopy. And then the robber fly will fly back up to its perch area, and then it will suck up the beetle guts. So it’s actually really, really cool.”

There is a robber fly in Texas – in the genus Laphria – that confuses many people by mimicking a bumblebee to avoid being predated upon by other types of animals, Brown said.

What’s bugging you? Drop us a line and we’ll pass it along.