The film had its world premiere at the Austin Film Festival and opens in theaters across the country Nov. 11. 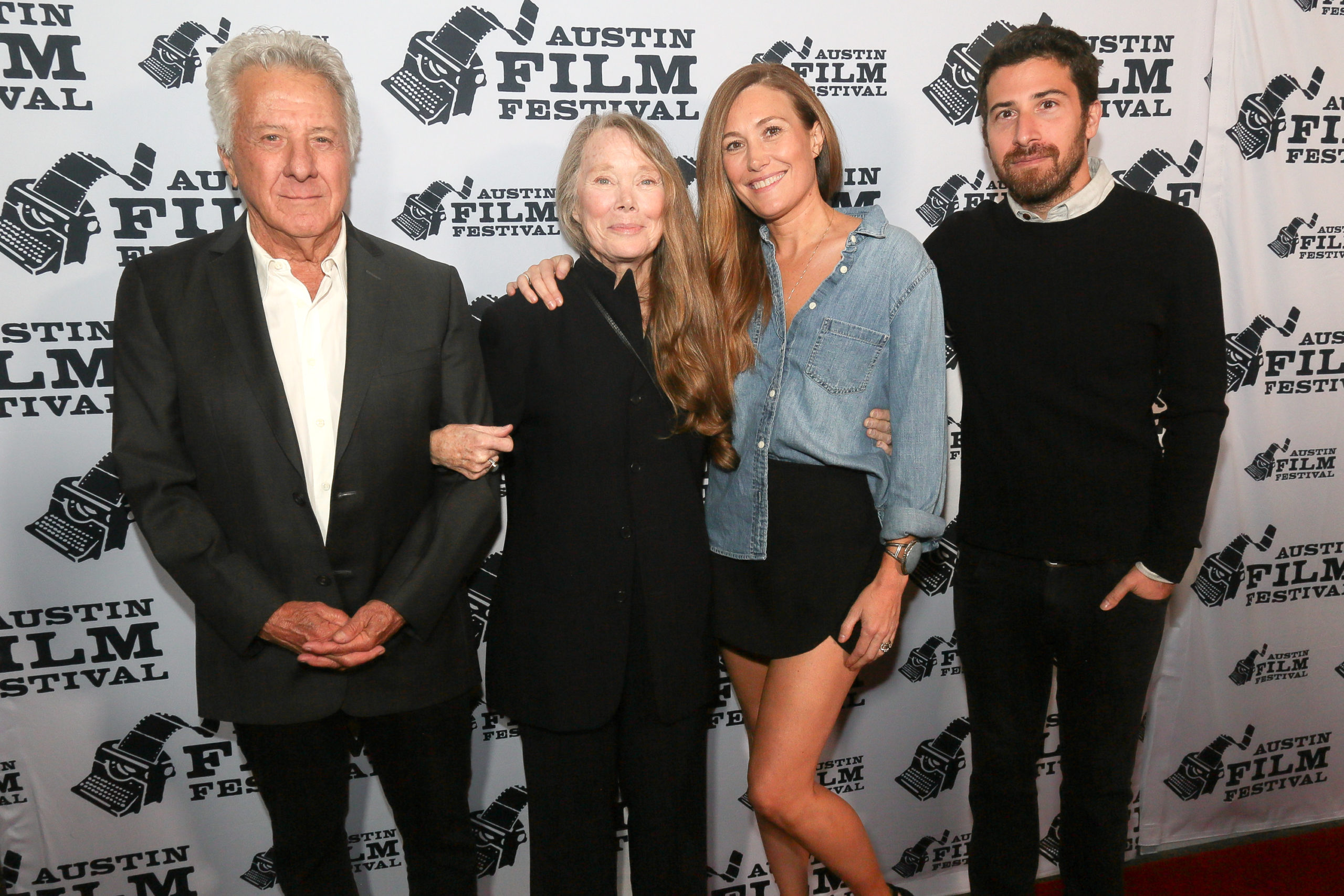 Dustin Hoffman, Sissy Spacek, Schuyler Fisk, and Jake Hoffman pose for photos on the red carpet at the premiere of "Sam & Kate" at the Austin Film Festival.

The new film “Sam & Kate” has four leads, with the title characters played by Jake Hoffman and Schuyler Fisk. Jake is Dustin Hoffman’s real-life son, and Fisk is Sissy Spacek’s real-life daughter. On screen, they play these same roles.

It’s both the feature screenwriting and directing debut of Darren Le Gallo. “I wrote the script seven years ago. So at the time when I first wrote the first draft, if you had told me that I was going to have the cast I had, I would have never believed you,” Le Gallo says.

That cast is thanks in no small part to – keeping with the family theme here – Le Gallo’s wife, Amy Adams, who served as an executive producer on the film.

“You know, half the time when she’s cast for something, or when she’s offered a role, she’s casting someone else,” Le Gallo says. “She’s like, ‘Oh, I know who would be perfect for this.’ And she’s really good at it.”

Le Gallo gives Adams credit for first thinking of bringing on Schuyler Fisk – who was thrilled to get the script with her mom, Sissy Spacek. “We’ve always wanted to do something together like, the right thing. You know, where we got to play opposite each other, you know, act together,” Fisk says. “Because I’ve done some things where I play her as – her younger self, but it’s never like in a scene with her, you know, so it hardly counts. So this was something we were thrilled to be a part of.”

“With my mom it was very collaborative and very open and just a really respectful, fun working relationship,” Fisk says. “And we got to, like, hang out together and be together. It was just – it was really special.”

Not only does the film feature these parent-child relationships – it also explores them. Le Gallo says the story was inspired by his own daughter and her questions about mortality, which it turn made him reflect on his own parents.

“Every once in a while, if you take a moment, you realize, you know, a bit of gratitude for that you can still pick up the phone and call them and that we’re still here,” Le Gallo says. “I think having my daughter really helps me – it reminds me to really just capture moments and be present and let the people that you really care about …  to tell people we love them.”

And the reality of mortality and life’s struggles are why – when you’re watching “Sam & Kate” and watching a real-life child struggle or mourn something happening to their real-life parent – even though they are both playing characters, it can feel more real.

“That’s the thing that we I think we can all relate to when we’re watching it is that it’s something we’re all going to experience,” Le Gallo says.

“To me, I think a big theme of the movie is these moments, these big life events that these characters go through, that we all go through in life, you know, that you think of your life kind of split into two parts, you know, like before this happened. And then after this happens,” Fisk says.

For Fisk, portions of the film “Sam & Kate” also parallel other parts of her own life. She’s a musician and wrote and performs a song for the film.

“I was so moved by the script that I feel like it just I had an idea of what I wanted [the song] to be sort of off the bat,” Fisk says. “And there was one day very early on, I mean, this was years before we filmed… I think my original voice memo on my phone that I recorded the song on was like October 2020. And I was over at my mom’s house and she has a beautiful piano. And I just started playing and singing and wrote it like in one sitting.”

“Sam & Kate” resonated with those who caught its world premiere at the Austin Film Festival. It won the audience award for marquee film.

For Director Darren Le Gallo, having the world premiere in Texas was also a bit of a homecoming. He grew up in San Antonio.

While “Sam & Kate” is not based in Texas explicitly – it was inspired by his upbringing.

“I knew that I wanted it to be based in the Bible belt. Somewhere in the middle of the country, “ Le Gallo says. “Because, you know, it’s not autobiographical, but there are definitely things like this in my life. And I, you know, I grew up going to the church when I was young. And yeah, I think it was really just about that slice of – American life.”

Sissy Spacek was born and raised in East Texas and her daughter Schuyler Fisk says she has “some serious Texas roots” and claims Texas “aways, as home base.”