San Antonio’s North East ISD will replace some books featuring LGBTQ+ characters with straight ones. Here’s how that will impact students

After a review of books that include LGBTQ+ characters, the district permanently removed 110 books from school libraries. 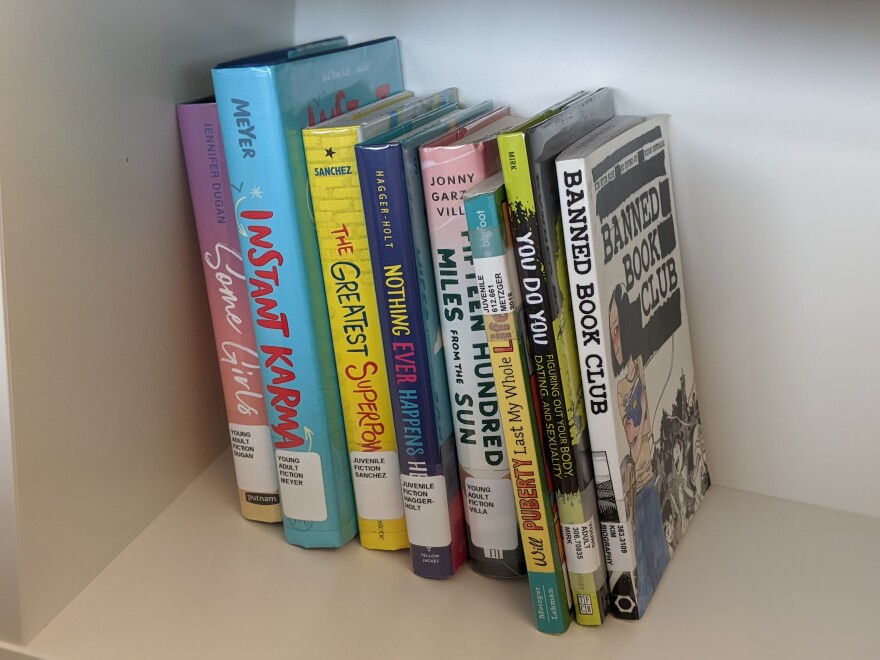 Some of the books NEISD Library Services recommends campus librarians order to replace removed books. Instant Karma is a suggested replacement for Love, Creekwood even though it has no LGBTQ characters. These titles are all available at the San Antonio Public Library.

Fifteen-year-old X, who is trans, feels like he can be himself at his magnet school in the North East Independent School District.

“It’s not just the regular school, it’s also the art school and it’s the International School of the Americas. ISA is very, like, socially active, so I think that helps,” said X. “And also, (a lot of the people at my school) are also members of the LGBTQ community.”

TPR is using his and his mom’s first initials to protect their safety, due to Gov. Greg Abbott’s anti-trans executive order to investigate gender-affirming care as child abuse.

But outside that bubble, there are a lot of things happening that make X and his family feel less welcome and less safe: Abbott’s executive order to investigate gender-affirming care for trans youth as child abuse; Lt. Gov. Dan Patrick’s pledge to make a so-called “Don’t Say Gay” bill a priority the next legislative session; and North East ISD’s decision to remove dozens of LGBTQ+ books from its libraries.

“It’s difficult for us to be ourselves when there isn’t any representation in the media that we see. And there’s already a serious lack of representation. But now with the banning of all the books, it’s even worse,” X said. “It’s very isolating.”

X’s mom, M, said the district’s decision to pull more than 400 books for review, many of them with LGBTQ+ characters or topics, makes them feel less welcome in the district as a whole, even though they love their magnet school. District officials have always insisted that the book review and their decisions were not about viewpoints. They said they want students to feel represented by their libraries.

The first time Superintendent Sean Maika spoke publicly about his decision to use State Rep. Matt Krause’s list to review books in NEISD’s libraries, he was careful to say the review was not about the ideas contained in the books.

“We are not banning books,” Maika said during the December 2021 meeting of NEISD’s board of trustees. “We believe that our school library should be a place where different viewpoints are made available. Libraries should and must be inclusive of all children.”

In an interview with TPR in April, Chief Instructional Officer Anthony Jarrett said the district’s intention from the beginning was to replace any removed books with another book of the same type or topic.

“Because one of the things we didn’t want (was) to remove or consider removal of a book based on viewpoint,” Jarrett said. “That was never something we discussed doing. And I think that’s where the public kind of got a little mixed up on, because our goal was to make sure that they were on the appropriate shelf and sitting with the appropriate kids.”

The use of the word “viewpoint” is key, because in 1982 the U.S. Supreme Court ruled that school boards violate students’ First Amendment rights if they remove books from school libraries “simply because they dislike the ideas contained in those books.”

But, from the start critics of the book review have also looked at Krause’s list and disagreed. Krause created the list looking for books that might make students feel “discomfort” based on their race or sex, and most of the books were written by women, people of color or LGBTQ+ authors.

As a queer student, NEISD senior Kira Sutter said she was disheartened but not surprised that many of the books NEISD decided to permanently remove from campus libraries covered LGBTQ+ topics.

“They chose to go off of Krause’s list, which by nature was politicized and was against anyone who does not fit into that box of what it means to be a good person, or like, you know, the ideal person: being a straight cis, white man,” Sutter said.

Regardless of the district’s intentions, X’s mom, M, said they don’t really matter compared to the impact of the review. She’s worried that hearing about the review made LGBTQ kids feel less accepted.

“The bottom line is what they did was really harmful to the kids,” M said. “Especially in Texas, where you have bill after bill and you feel, you know, very targeted and very isolated and hated in a lot of ways, and it can be really scary, the school, the library, they should be safe places for kids to feel represented and understood.”

“It’s particularly dangerous to have, you know, teenagers, but in particular, trans teens feeling so isolated, because especially, I mean, always so but especially, you know, post pandemic, you know, the suicide rates have risen drastically,” M said.

Research shows most trans teens have considered suicide. That risk is reduced when they have support, including gender-affirming care.

The ACLU of Texas sent NEISD a letter on April 20, warning the district that it had violated the First Amendment by permanently removing 110 books from its library shelves after completing its review, and urging the district to put the books back. The letter argued that the books reviewed by the district were chosen based on their content, which goes against the Supreme Court ruling.

NEISD attorney Ricardo Lopez sent a letter back to the ACLU refuting the claim that the book review was discriminatory to any viewpoints.

“Contrary to what has been reported by some media outlets, the District’s review process is not a banning of certain ideas or viewpoints. It is not an effort to marginalize or discriminate against any groups, and it is certainly not the book burning scene from the movie ‘Footloose,’” Lopez wrote. “Instead, it has been a measured effort to ensure, among other things, that books on shelves are age- appropriate considering the material in the book.”

Huddleston said the ACLU was not yet considering a lawsuit. “We are evaluating next steps, but we are very hopeful that the districts will comply with the First Amendment and return books to shelves,” she said.

The ACLU also said several of the books NEISD has recommended to replace the pulled books aren’t about LGBTQ+ topics. “

(We found) I want to say at least 15 that had similar issues,” Huddleston said. “It demonstrates the larger problem here, which is that the district is targeting LGBTQ+ books for increased scrutiny and removal.”

That was one of M’s fears — and a fear of NEISD senior Kira Sutter as well.

According to TPR’s analysis of the list of recommended replacements, some of the replacements don’t have LGBTQ+ characters and themes — which means campus libraries will likely end up with fewer LGBTQ+ books overall.

X, however, said he’s not surprised.

“I kind of expected that because a lot of these books are very unique individual experiences, and of course there aren’t going to be like two books that are exactly the same,” X said. “Which is why I think it’s important for the book ban in itself to just get reversed and not for them to just find replacements.”

However, many of the replacements do have LGBTQ+ characters.

Happy Families, Nothing Ever Happens Here and The Greatest Superpower are all about teens whose parents come out as trans, for example. And Lies My Girlfriend Told Me, Some Girls Do and The Falling in Love Montage all feature teen girls with girlfriends. Many of the books NEISD recommended as replacement do have LGBTQ+ characters. Happy Families and both its recommended replacements, The Greatest Superpower and Nothing Ever Happens Here, are all about teens whose parents come out as trans.
Bri Kirkham / Texas Public Radio

Going forward, Sutter’s worried that LGBTQ+ books will be the subject of increased scrutiny simply because they are LGBTQ+.

“My fear with a lot of their deciding whether it’s adult material, is how, specifically, so much information about queerness is associated with like sexual themes,” Sutter said. “It opens up the idea of being allowed to say, ‘Oh, this is something about you know, queerness therefore, an adult theme,’ because they’re already so like, intrinsic in hetero-normative society.”

She sees the book challenges in other Texas districts and the book review at NEISD as part of a wave of anti-LGBTQ+ actions in the state.

Sutter said pulling LGBTQ+ books would be bad no matter when it happened, but the governor’s executive order targeting trans youth makes it worse.

“Trans kids are going through so (many) tumultuous things,” Sutter said. “Now, Abbott’s pulling health care, and now you guys are pulling books and things that are going to be affirming to their mental health and their knowledge of themselves,” Sutter said. “It’s just like a one two punch of horribleness.”

Equality Texas CEO Ricardo Martinez said the focus on LGBTQ+ library books and the governor’s executive order are part of the same swath of attacks started during the last legislative session.

“2021 was the worst legislative year in Texas for anti-LGBTQ+ legislation and the worst in history for any state in this country,” Martinez said. “We are seeing this recent push in Texas and across the country a marked shift in the political climate that is defined by government interference, censorship and fabricated moral panic.”

“While there have always been these extreme voices that are pushing socially conservative issue wars, those voices have recently gained this platform in mainstream politics,” Martinez said.

For X, the North East freshman, all of those political forces make it even more important for teens to have access to library books that make them feel less alone.

“For trans youth, and for LGBTQ youth in general, and everybody else who’s targeted by the book bans, I think that with everything else happening, it feels important to me at least to have this kind of representation so that at least, with everything that’s going on, we still have something,” X said.

“And going back to what my mother said, like with the suicide rates going up, I feel like that’s going to take a turn for the worse if this continues like this.”

This was the second of a two-part special report exploring the district’s actions and subsequent reactions. Read Part 1 here.

TPR is producing an occasional series of stories on the rise in book challenges and political efforts to control what’s taught in Texas schools. If you’re a campus librarian, history teacher or LGBTQ+ student with a story to share, email [email protected] or message her on WhatsApp.