The first American POW to escape North Vietnamese captivity was a Texan. How he remembered the experience.

In a 2010 interview with the Voces Oral History Center, Isaac Camacho recalled how the trauma of captivity weighed heavily on him. A uniformed Camacho sits in the back of a convertible in a parade upon his return to the United States.

“That night we heard the blast going on and they started the attack and manure hit the fan – like they say. People started coming and hitting us real bad,” Camacho told the Voces Oral History Center in 2010.

He said American forces were outsmarted by the resourcefulness of the North Vietnamese.

“They had a network that, you know, should be in the classical books, in the history books for everybody to know that that’s what they did,” Camacho said. “They’re crawling all over the fences and all that … they’re coming in to get us. And we’re just not gonna be able to defend ourselves.

Camacho’s lieutenant ordered the men to evacuate the camp but there were three men who hadn’t been able to get out. Camacho went back in.

“I mean it’s not in my heart to leave them, you know, without even a warning. I just went back into the camp to try to get them out and that’s when I got captured,” Camacho said. Isaac Camacho was born on June 3, 1937 in Fabens, Texas, a small town just east of El Paso. He joined the Army Special Forces after high school. By the time he was 26, he was stationed in South Vietnam.

Camacho and three other soldiers were captured that night in 1963. He said they were beaten, blindfolded and forced to walk north for nearly four weeks into a North Vietnamese base.

“One thing that I’ll never forget was that when we were walking on that little road … they formed a line, like a firing squad,” Camacho said. “They were just about to fire when somebody yelled ‘don’t kill them, they want them alive.’”

When the POWs reached the North Vietnamese camp, he says they were shackled and confined to six-by-eight feet cages. To stay alive, Camacho said, they had to abide by an extensive list of rules.

“Don’t try to escape or we’ll kill you. We were put in separate cages, one man cages. It was strictly forbidden that we talk to each other,” Camacho said.

Captivity was challenging. Camacho contracted malaria and hepatitis. They were given very little to eat.

“A little measured cup of rice,” Camacho said. “That’s where they got us. If you will, it’s a slow starvation phase to a point when you’re just about to die.”

He lost more than 50 pounds.

For 18 months, Camacho waited for his chance to escape. Finally, he said, the guards removed his shackles to use them on incoming prisoners. Camacho waited to make his move. He knew monsoon season was approaching and with that there could be a chance to run.

“Lo and behold I could hear the thunder and lightning,” Camacho said. “I could see by the flash that there was one hell of a storm coming.”

On July 9, 1965, during heavy rainfall, Camacho silently pried loose a bar from his cage and ran. He ran for four days, struggling to stay alive.

“When I get to what I think is ‘oh this is the last day, I can’t go no further’ that’s when I saw this L-19 [a small reconnaissance plane]. I saw the U.S. Army emblem on the side. Oh man that just lifted my morale. I said ‘I can make it now,’” Camacho said.

The trauma of captivity weighed heavily on him. 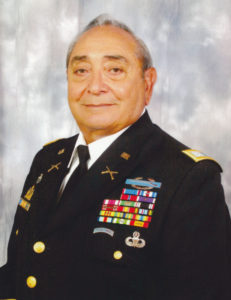 “Something was really bothering me — not only the flashbacks and being face to face with death so many times and alluding death,” Camacho said. “You know when you tie a dog for a long time and you let him loose and he goes crazy, that kind of thing happened to me.”

Camacho retired from the Army as a master sergeant in 1975. Later he learned the fate of those other soldiers who had been taken as POWs: two were released and one was reportedly executed by the North Vietnamese.

This story was produced in collaboration with the Voces Oral History Center at UT Austin’s Moody College of Communication.