The Freeze Damaged Austin Apartments. Now Some Tenants Want To End Their Leases; Others Have Nowhere To Go. 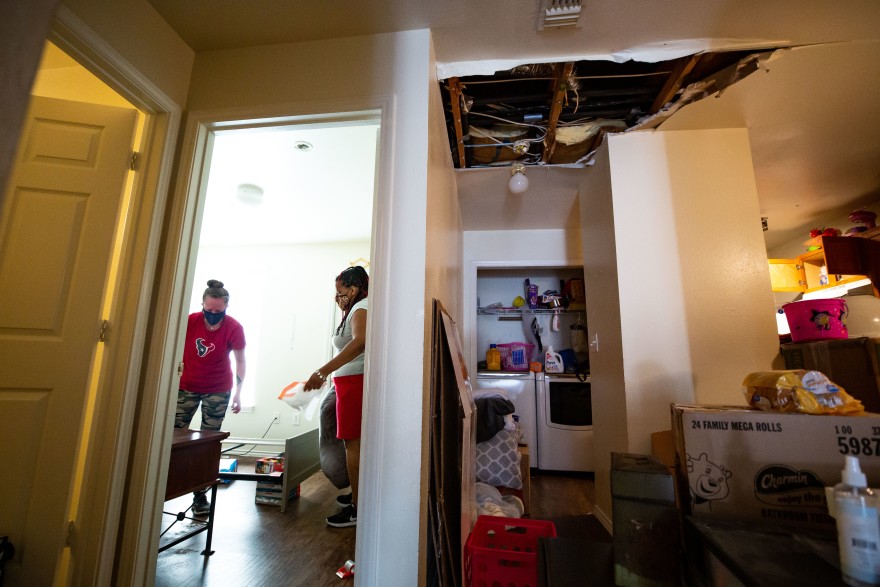 Jenn Brown (left) helps Kristen Carpenter move out of her Round Rock apartment earlier this month. Carpenter's landlord terminated her lease because of property damage from the February winter storm.

The walls of Ann Marie Romero’s one-bedroom apartment in Northeast Austin are speckled with mold. She hasn’t lived there since mid-February, when pipes burst because of freezing temperatures, soaking much of her furniture and clothes.

Romero has been sleeping on friends’ sofas; this week she’ll tally her fifth couch in two months.

“I’m still very much living in survival mode,” she said Saturday, as a group of her fellow tenants gathered in protest outside their apartment complex, Mueller Flats. Residents say property managers have failed to make repairs or provide accommodations for nearly 200 renters living with mold on their walls and holes in their ceilings.

Austin’s Code Department said it has confirmed 120 instances where the landlord has violated city code, all related to the winter storm. The property management company, Firmus Management, did not respond to an email from KUT. No one answered the phone at the leasing office and the voicemail box was full. Tenants gather Saturday outside Mueller Flats, an apartment complex in Northeast Austin, to ask their landlords to fix damage from the winter storm and give residents the option to end their leases early.

Romero has asked to end her lease without any fines or penalties, terms she says the management company has not agreed to. State law allows tenants and landlords to terminate a lease before its expiration date if an event that’s unexpected or unusual damages the property, making it unlivable.

Dozens of renters and landlords in Central Texas continue to deal with damage caused by winter weather that left hundreds of thousands without power and running water for days. The damage appears to be most severe in older apartment complexes where infrastructure is aging; Mueller Flats, for example, was built in 1983, according to property records.

Middle- and low-income renters tend to live in older housing because it’s often cheaper. But now they’re suffering the consequences of damage landlords say can’t easily be fixed or that management companies simply haven’t responded to.

“I’m definitely feeling like I’m at a breaking point,” Romero said. “It’s just so much all the time. It’s just every single day I’m dealing with some aspect of [this].”

‘Your Unit Has Become Totally Unusable’

While some renters want out of their leases, others are desperate to stay — despite potentially dangerous conditions. But landlords say they need them out to make repairs.

The company that manages Kristen Carpenter’s town home in Round Rock told her it was ending her lease early and she had a week to move. She and her three kids, all under the age of 11, had been living in a hotel paid for by the management company for about three weeks when the front desk called her down, saying there was a letter for her.

“We regret that this damage has occurred,” the notice reads. Carpenter has a gaping hole in her kitchen ceiling where a pipe burst. She said the first day of the winter freeze, water poured down into her kitchen, destroying many of her appliances, before a neighbor helped turn it off.

For weeks, she and her kids continued to live there, plugging a hotplate into the bathroom outlet to make what meals they could.

“Unfortunately, the damage to your unit is so extensive that your unit has become totally unusable as a practical matter for residential purposes,” the letter continued, stating Carpenter had a week to move her things out.

“I am scared out of my mind because I do not know what I’m going to do,” Carpenter said. “I do not sleep … I’m just worn out. I’m thinking of a million things all the time.”

According to volunteers who have been helping these tenants, Carpenter’s family is one of at least 48 families living at the Townhomes at Double Creek who have had their leases terminated by the management company, Sandalwood Management. In the letter Carpenter received, Sandalwood cites the same law Romero does in trying to get out of the rental agreement: an unexpected event occurred and so it has the right to end the lease before its expiration date.

Sandalwood did not respond to a request for comment.

With the help of friends, Carpenter hustled last week to empty the four-bedroom townhouse she’d lived in for four years. In the back of her bedroom closet, she retrieved a Mother’s Day card her 10-year-old made and an ultrasound from her third child, born last June.

But Carpenter doesn’t want out. She says she has nowhere to go.

The last year has been hard for her. In late 2019, she had to leave her job at a cellphone store because of a pregnancy that left her vomiting at all hours of the day. She paid the $1,266 monthly rent by using savings, unemployment benefits and borrowing money from friends, but once the pandemic began, help dried up. Carpenter said she hasn’t been able to make a rent payment in a year.

She said she asked the management company if it terminated her lease because of unpaid rent, and it told her no, this was related to the storm. During the pandemic, Carpenter has been protected from eviction by the federal government’s eviction moratorium.

There has been some relief for tenants in these cases. According to the Austin American-Statesman, a Williamson County judge ruled last week that the management company must continue paying for hotels for residents who have been evicted. But a volunteer working with the tenants told KUT the case is fast-moving and the judge’s order was dissolved Monday.

On Tuesday, Carpenter said she was staying the night at the hotel, but beyond that, she wasn’t sure if the management company would be required to keep paying for it.

‘We See What’s Going On In Round Rock’

Residents at an East Austin apartment complex heavily damaged by the winter freeze say they hope an agreement they reached with their property owner can be replicated at other apartments across the city.

For the past month and a half, more than 200 people living at the Mount Carmel Village Apartments have been doing so without gas — meaning no heat, hot water or working stoves. But on Tuesday, the tenants signed an agreement with their landlord to make amends, including a one-time payment and temporary housing while repairs to a broken gas line are made.

“It’s been a long process,” resident Taniquewa Brewster said. “There was a lot of cold showers and no cooking, but it’s been important for me.”

“We see what’s going on in Round Rock,” she said, referencing the issues at Double Creek, where Carpenter lives. “We want to help other places.”

Tenants, property owners, advocacy groups and a local housing authority spent dozens of hours negotiating a deal. The complex, which receives federal funding to subsidize rent for its low-income tenants, is owned by Eureka Multifamily Group.

According to the company, the ground underneath the property shifted during the winter storm, causing leaks in the complex’s main gas line. Eureka’s general partner, René Campos, apologized to residents on Tuesday.

“I understand it’s really, really inconvenient. It’s been extremely difficult and I really feel bad about that,” he said.

Campos said repairs could take anywhere from three to four months. Per the negotiated agreement, residents will receive a one-time payment of $375, funds to help offset utility bills and a guarantee they will be able to return to their apartments.

For now, Brewster’s five children are enjoying the nearby house they’re living in until they can return to their apartment. She says the family has been enjoying what many take for granted — having a functioning stove, for example.

“Being able to cook? They’re excited about that,” Brewster said.