The Moyers on Addiction: A Public Family Talks About A Private Problem 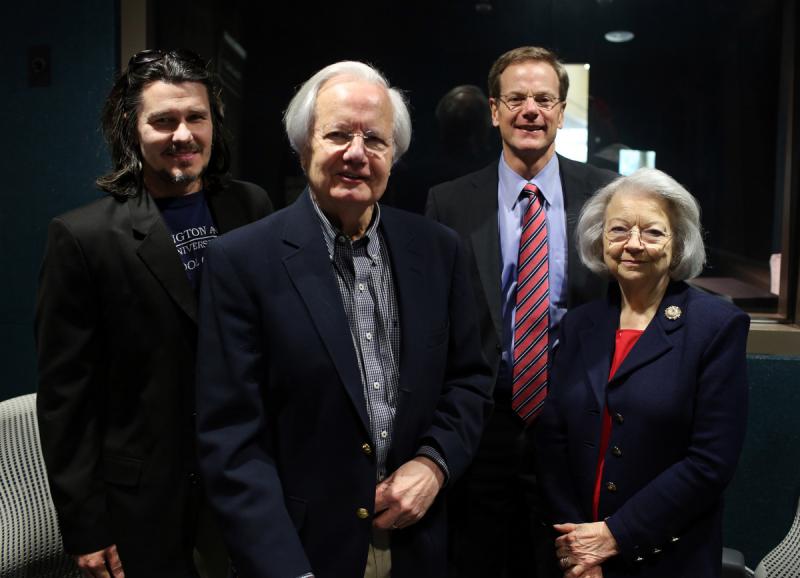 Texas Standard's David Brown (left) recently sat down with Bill, William and Judith Moyers for a discussion of addiction.

Addiction affects nearly 23 million Americans, according to the Substance Abuse and Mental Health Services Administration. Yet only about 10 percent of those affected are receiving treatment.

Addiction comes at a high price to society. It’s estimated that drug and alcohol abuse costs the United States around $500 billion a year in health care spending, lost productivity and crime. But perhaps the friends and families of those struggling with addiction can best attest to the emotional, psychological and social toll of the illness.

One American family knows the struggle addiction brings all too well.

Recently, the Texas Standard’s David Brown sat down with author and former CNN journalist William Cope Moyers and his parents – Bill Moyers and Judith Davidson Moyers, also prominent journalists – to talk about one of the nation’s biggest health concerns.

Moyers has written several books on his personal battle with drugs and alcohol. He’s a longtime advocate for those in recovery and says he wants to eliminate the stigma of addiction and the shame of relapse. He also wants to break down barriers that prevent people from accessing effective treatment. One of the hardest things for both addicts and families, he says, is accepting that a problem exists.

“I remember waking up one day and thinking if I have a problem, I’m probably going to have to ask for help,” Moyers says. “But of course, addiction is a disease of denial, not just to the person who has it, but to everyone around that person, particularly when that person functions like I did.” Moyers says he had to hit bottom before he finally accepted help. Even then, the grip of his addiction didn’t let up easily.

Though relapse is a part of recovery, it comes with a stigma. “People – whether they’re suffering from diabetes or hypertension or asthma – they want to recover as well,” Moyers says. “It’s just that when somebody relapses with the disease of addiction, it tends to be rather ugly – and a shock because people want to believe that it’s done, that it can’t happen again.”

Moyers says he’s one of the lucky ones – he survived relapse and had a loving, supportive family believing in him.

Still, Moyers says it’s important to hold addicts accountable for their actions. “You do the crime, you do the time,” he says. But he also warns against the folly of incarceration without making treatment more available.