Why is it so hard to see lines on Austin roads at night?

Costliness of maintaining and adding lane lines and other improvements is one factor as markers degrade under the elements. Road lines in Austin can be hard to see, even though major thoroughfares get restriped every two years.

North Austinite Jennifer Thall gripped the steering wheel of her Toyota Corolla while driving to pick up some free houseplants in the Copperfield neighborhood one night. The lane lines on the asphalt seemed to vanish in front of her.

“There’s a lot of places in Austin that the lane lines themselves are very, very hard to see at night,” she said on a rainy afternoon in North Austin. “It can be really scary if there’s oncoming traffic, just kind of hoping that they’re not trying to play chicken with you. And if they have bright headlights, it’s even worse because you’re just driving into a bright light.”

Thall wondered why the lines are so hard to see in the dark, so we looked into it for our ATXplained project.

More than half of road deaths in Austin happen overnight. Quite often the crashes involve people veering outside their lanes, so the city tries to keep the lines looking bright.

“We have about 40 technicians and they are working hard every day,” said Lauren Seyda, who oversees signs and markings for Austin’s Transportation Department. “They feel the burden that there is a lot of work to do.”

The city aims to restripe half the city’s major thoroughfares — so-called arterial roads — every year. That’s about 185 miles of streets. Last fiscal year, Austin repainted 54% of arterials. Non-arterial roads get restriped every four years or so.

“We could have 100 more staff and all the trucks in the world and there would still be work. There’s just so many streets,” Seyda said.

A striper truck sprays the lines and then tiny glass beads, almost like a powder, are blasted on top and stick to the paint.

Each glass bead works as a small directional mirror to reflect your headlights back at you. The directional bouncing of light is called retroreflectivity. That’s why freshly painted traffic markings appear to glow at night.

But when it rains, the retroreflectivity is ruined.

“What water does is rather than reflecting the light back to the source, it just diffuses the light because of refraction,” said Chandra Bhat, an engineer at UT Austin’s Center for Transportation Research. “Essentially, the light doesn’t come back to the driver, but it just gets all over the place and it just becomes difficult for the driver to see.”

The lines can also get covered quickly with dirt and other contaminants spewed by cars and trucks. The problem is often worse near construction sites and other places where mud could be more frequently scattered over the road. Side streets are restriped less frequently than major roads, giving lane lines more time to deteriorate. This is a residential street in Hyde Park.

“The issue that comes into it is really the cost,” said Adam Pike, an engineer who researches pavement markings at Texas A&M University’s Transportation Institute. “Like a standard waterborne paint with glass beads, that’s really your base pavement marking. That’s the cheapest system out there. Like most things, you kind of get what you pay for.”

Right now, the city is spending about $6.6 million per year to hire two companies that handle pavement markings and traffic signs. Thermoplastic is a more durable product used for crosswalks and the stop line for cars at intersections. The product is sometimes used for lane lines in Austin, but it can still get dirty and crack.

Raised pavement markers, those little reflective squares on the ground, also increase visibility at night, but they can cost several dollars a piece to install.

“On high-volume roads, they need to be replaced fairly often,” Pike said. 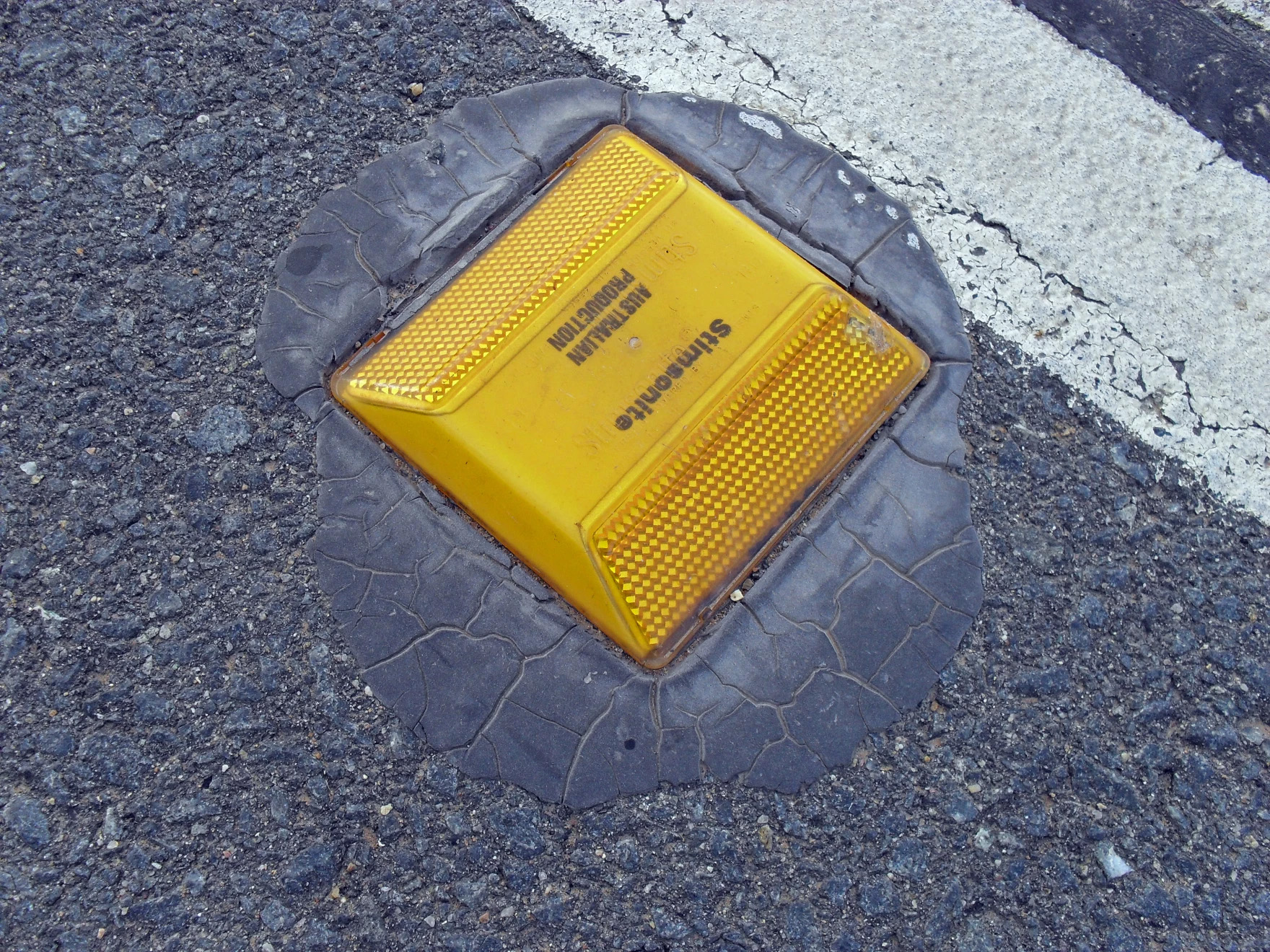 Reflective raise pavement markers are more expensive than traffic paint, and on busy streets they need to be replaced fairly often.

3M makes a pavement marking tape called Stamark that uses high-tech ceramic beads instead of glass. Stamark can last for years, but it can cost more than 10 times as much as paint.

“It’s definitely going to be more costly if you think about just an initial purchase price basis, but that tape can last a long time,” Dan Chen, vice president of 3M’s Transportation Safety Division, said. “When you look at the cost of that solution over time, it’s basically on par or sometimes even less expensive than putting a cheap coat of paint down that might last six months to a year.”

Austin is experimenting with more reflective materials, including some 3M products. A pilot project at several high-crash intersections involves the use of 3M’s thermoplastic paint with ceramic beads for crosswalks and lane markings. Austin-Travis County EMS stations have used Stamark for years to help with backing up ambulances into tight spaces.

Ultimately, the federal government might force Austin to use more expensive materials. And there will be millions of dollars in federal funding to help foot the bill.

For the first time, the U.S. Department of Transportation has adopted new minimum retroreflectivity levels for pavement markings. State and local agencies have four years to come up with a plan to keep lane lines bright at night.

But there’s no deadline for replacing faded markings.