Vaccine hesitancy among Black Americans doesn’t come from paranoia, but rather a long history of racism in medicine, experts say. 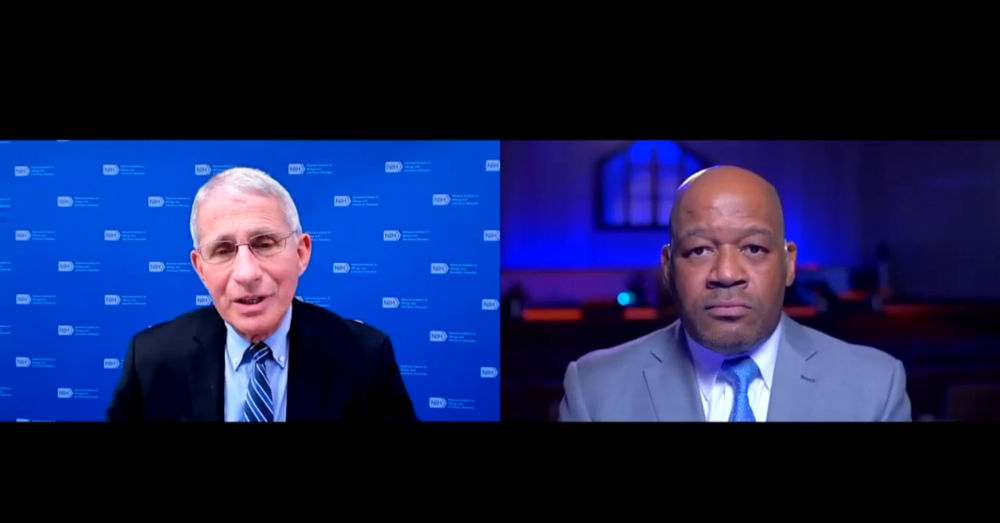 Pastor Timothy Sloan interviewed Dr. Anthony Fauci, Director of the National Institute of Allergy and Infectious Diseases, about the COVID-19 vaccine. The Zoom call aired during a virtual Sunday sermon at the Luke Church in Humble.

When the COVID-19 vaccine was authorized for use in December, Pastor Timothy Sloan was chatting with some of his congregants and the question of whether to get the vaccine came up. Sloan leads a Black megachurch in Humble called The Luke Church, and he knew that some of his 5,000 members would look to him for guidance.

But the answer didn’t come easy for Sloan. Growing up, he’d heard about events like the Tuskegee Study, a well-known example of medical exploitation in the Black community. Beginning in the 1930s, scientists left syphilis untreated in a group of Black men in order to study the disease. The U.S. federal government conducted the experiment without obtaining informed consent.

“The oral stories that have been passed down have certainly been filtered with a great deal of trauma,” Sloan said. “There was always kind of a certain unspoken mistrust of medical professionals, and just because we felt like that there was racial bias towards us.”

That trauma has built up over generations, creating skepticism towards health care in Black communities. And it’s a skepticism Sloan himself shared.

The pastor talked about that on a recent Zoom call with Dr. Anthony Fauci, the director of the National Institute of Allergy and Infectious Diseases, who acknowledged that history of medical mistreatment. Fauci was asked to discuss the benefits of the vaccine, and provide reliable information for Sloan’s congregation.

“Before the camera came on, I can’t say that I was totally confident to say yes,” Sloan said.

This lack of confidence isn’t unique to Sloan. Throughout the pandemic, state and national polls have consistently shown that Black Texans and Black Americans are the most reluctant to get the COVID-19 vaccine out of all racial groups.

The most recent study from the University of Houston Hobby School of Public Affairs, found that more than half of African Americans in Texas aren’t planning on getting the vaccine or haven’t made up their minds yet. Respondents said mistrust towards the government, drug companies and vaccines in general are among the top reasons for that hesitation.

That hesitancy doesn’t come from paranoia, but rather a long history of racism in medicine, according to Dr. Bettina Beech, associate dean at the UH College of Medicine

“There’s no shortage of historical examples of medical atrocities that have happened with communities of color,” Beech said.

Among these medical atrocities are documented cases of forced sterilization, and experimental procedures and studies like Tuskegee that failed to obtain informed consent.

As medical historian Harriet Washington wrote in her book Medical Apartheid, “researchers who exploit African Americans were the norm for much of our nation’s history, when black patients were commonly regarded as fit subjects for nonconsensual, nontherapeutic research.”

In U.S. medicine, Black patients have often been put at risk for the advancement of research that benefits white communities. Centuries of these practices have cemented a justified mistrust toward medical professionals, Beech said.

But, she added, you don’t have to look back very far to see reasons why communities of color don’t trust the medical establishment.

“We had disparities in COVID-19 testing,” Beech said. “That just happened less than a year ago.”

During the spring, minority neighborhoods in Texas cities like Dallas, Austin and El Paso had less access to COVID-19 testing. Houston was one of the few cities to have more testing sites available in majority Black and brown neighborhoods.

In recent weeks, similar questions have been raised regarding vaccine access for people of color.

Data from Harris County Public Health, which is only one of six hub providers in the county, shows that just 12% of doses they’ve administered have gone to Black Texans, even though they’re approximately 20% of the county’s population.

Beech said it’s up to these institutions to repair that relationship.

“I think we ought to shift the dialogue from lack of trust to, ‘are our organizations trustworthy?’” Beech said. “So that the onus is not on the group that is being marginalized, but it’s on society to demonstrate goodwill.”

Which is what some public officials are trying to do.

Last week, Harris County launched a $1 million media campaign to educate people on vaccine safety, including in communities of color. During an interview on 97.9 The Box, Harris County Judge Lina Hidalgo recognized the mistrust people in those communities have for public health programs.

“I understand folks are reticent when it says ‘government,’” Hidalgo said. “There is a lot of tragic history there.”

Some vaccination efforts at the Houston Health Department have also focused on equity for minority communities, such as setting up weekly vaccination sites at clinics in underserved zip codes. Houston Mayor Sylvester Turner has publicly emphasized the importance of closing disparities for underserved groups.

“We are all very much concerned about the disparity and the inequity in distribution,” Turner said during a press conference Saturday.

Houston-area officials have called on the state and federal government to send more doses to safety net providers like the Houston Health Department and Harris County Public Health.

These are providers Pastor Timothy Sloan said he’s now interested in working with to set up a vaccination site at The Luke Church. After speaking to Dr. Fauci, who validated his skepticism and ensured him of the safeguards in place to prevent another Tuskegee Study, Sloan said he came around on the idea of taking the COVID-19 vaccine.

“It really brought me to not only the confidence to take the vaccine myself, but to encourage others, too,” Sloan said.