How One Texas Town Fell To Communist Rule In The 1950s

It was too real. It was too frightening to believe it could be this way. But it was all a drill. 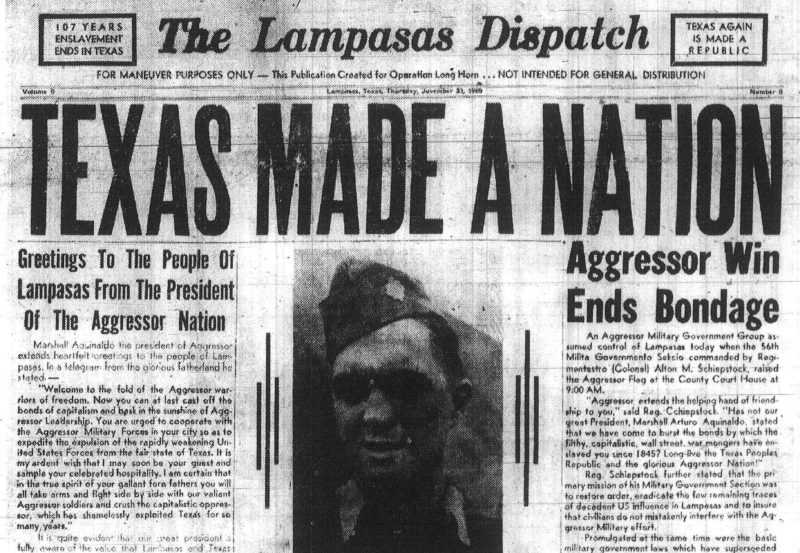 A newspaper clipping from the 1950s communist takeover drill in Lampasas, Texas.

In the early 1950s, the threat of nuclear war and Communism cast shadows over much of the western hemisphere. And for a brief time, they darkened the pastures and hills of Central Texas more than anywhere else.

On April 3, 1952, this message broadcast from KHIT in Lampasas, about 70 miles northwest of Austin:

“Shortly after eight o’clock this morning, the Aggressor government took control of the city. In rapid order, banks, places of worship, and schools were closed. City officials were arrested and taken to places of confinement. Lampasas, Texas – the community with a history as colorful as any storybook fable – today added another chapter.”

It was a complete and quiet takeover. The 5,000 or so Lampasans didn’t resist as infantry crept into the city. The occupiers seized public property, media outlets, utilities, and banks. Schools and churches would stay closed until teachers and clergy could be properly vetted. The entire court system was downsized to a single magistrate. Dissent could be punished by death. Much of the town assembled at the courthouse around midday. Someone produced a microphone and a soapbox, and Clyde Northington took them. He was president of the school board, vice president of the People’s National Bank, and Carol Wright’s father.

“He was one that was given the microphone and gotten up and spoke against the invasion,” Wright says. “He was carted off by two MPs and taken to jail. Scared me to death.”

“I’ve heard people talk about it and say it was really quite frightening,” Potts says. “Because it was too real. It was scary to think that it could be this way.”

She says it “could” be this way, because the occupation of Lampasas was a drill.

“In Texas, staff officers plot an attack that will encircle Aggressor forces,” said a U.S. Army broadcast “The Big Picture”. “Tanks go into action in Operation Longhorn, the biggest war games ever held in the United States. 115-thousand men are taking part, including troops from a specially trained, rapidly striking force impersonating an enemy.”

The Aggressor invaders were actually members of the very American 82nd Airborne Division. Operation Longhorn was one in a series of massive exercises preparing for a possible Soviet invasion.

The Army concocted this backstory that after World War II, a totalitarian state called Aggressor rose from Central Europe and attacked the United States. By 1952 Aggressors already controlled Florida and New England. After dropping an atomic bomb on Corpus Christi, the assault on Texas began. Here’s a message from an Aggressor officer to the American people from “The Big Picture”:

“As long as there is an American Army in existence, we will be at war with that Army. At this very moment, somewhere in the United States, American soldiers are locked in combat with the soldiers of the Aggressor nation.” But Longhorn was the only exercise that simulated an occupation with real civilians. Brian Linn is a professor of military history at Texas A&M University.

So the military flooded Lampasas with propaganda.

“Never again shall the political gangsters who have held the people of this great nation enslaved for so many years, have the power of life and death.”

And local leaders like Dan Nixon, the city manager:

“All we can do under the circumstances is to passively resist until we are liberated by our own U.S. forces,” Nixon said on the KHIT newscast.

And from persuaders like Aggressor Annie, who would broadcast a particular type of message to recruit Americans:

“Hello boys. We are not really enemies, but friends. So, let’s get together.”

For some Lampasans, this wasn’t much more than a passing curiosity. But for people like Carol Wright it felt real, and frightening. At this particular place and time, a nuclear strike or foreign invasion felt possible.

“They weren’t supposed to do that in my hometown,” Wright says. “You know – we had fought a war, we were supposed to be through with that.”

But the theatre of the occupation was just one aspect of the operation. For a couple of weeks, war games pitted the 82nd Airborne against three other divisions out in the countryside. Travis Herring’s father helped the military secure a plot about the size of Delaware for the exercises. But many of the ranchers paid an unexpected price.

“After it was over with, there was lots of them that was upset,” Herring says. “He was wondering then whether he was doing the right thing, cause he was getting their signatures so they could come in, and they’d just run over gates, and fences. Some of them – not all of them – but tore up stuff.”

Wayne Boultinghouse is now the Lampasas County Judge. Most mornings, he had a front row seat to tanks, planes, and troops passing by his house.

“After it all settled down, most folks were glad it was over and out of the community,” Boultinghouse says.

So glad, in fact, that they never wanted it to happen again. The plan was to stage another exercise in Central Texas a few years later. But Operation Longhorn left such a bad taste in the mouths of locals that the Army couldn’t secure enough land to pull it off. They went to Louisiana instead – and Lampasas was liberated once and for all.