‘I Am An Example’: A Dallas Immigrant From Congo Overcomes Barriers To Graduate College

Despite the pandemic, David Kapuku earned a degree in petroleum engineering from UT-Austin, this spring. 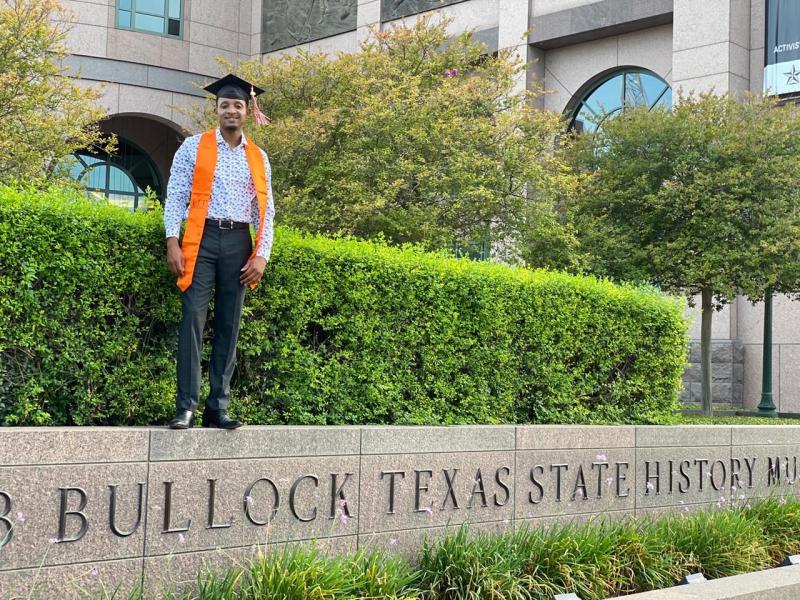 David Kapuku says he'd like to work in the oil and gas industry, doing reservoir engineering.

We first met David Kapuku in the fall of 2014, during an orientation for refugee students at Conrad High School in Dallas. He was the students’ guide, showing them around the building.

David had only been in the U.S. for more than a year after arriving with his family from the Democratic Republic of Congo. He was still learning English, but he’d already become a leader in school.

He credits a fellow student for being his guide when he was new. The student was also from Africa and spoke French like David.

“That’s why I say I’m gonna be there to help other people, like refugees or people who came here, but who doesn’t know how to speak English,” David said at the time.

David was one of the students featured in KERA’s eight-part series Generation One, about the challenges facing immigrant students in North Texas and how schools are helping.

Besides the initial language barrier, there were cultural differences and societal norms David had to learn to navigate, which is why when he hears people disparaging immigrants, it feels personal. When he hears politicians – including the president – threatening to cut programs, like the Diversity Visa Lottery, he thinks about his own family.

The Kapuku family traveled to the U.S. after their mother, Bernadette, won the chance to apply for a visa through the Diversity Visa Lottery program. Only citizens of countries with low-admissions to the U.S. are eligible to enter and the chances of being selected is small.

“I am an example. My family is an example,” David said, during a recent morning at his parents’ home in Dallas. “You know, we came here through the DV Lottery and we go to school and we don’t do illegal stuff.”

According to a report by New American Economy, immigrants from Sub-Saharan Africa actually have higher levels of education than U.S.-born citizens and other immigrants. They also participate in the labor force at higher rates than American-born citizens and the overall foreign-born population.

“We don’t come to the United States just to come,” David said. “We have like serious issues in our country and then when we come here, the number one thing we want to do is respect rules. And then, it’s very sad if we don’t do anything bad, but we are treated as bad people.”

The Democratic Republic of Congo is located in Central Africa and is the largest country in Sub-Saharan Africa. It was under colonial rule for 90 years by Belgium.

For years, it’s experienced political instability and civil war. Hundreds of thousands of people have fled. That’s why David said he’s grateful for the education he’s gotten in this country.

At his high school graduation, he was the salutatorian. Then, he was off to the University of Texas at Austin. He loved life on campus and going to football games. That is, until a couple of months ago, when COVID-19 forced him to finish his college career at home.

It was a struggle. He said he had to add constant reminders of classes and deadlines on his phone. And his family’s dining room table became his desk. Even so, he snagged a degree in Petroleum Engineering. He said he’d like to work in the oil and gas industry.

Like so many graduations around the country, UT-Austin had a virtual ceremony. Although it was online, he drove back to Austin to celebrate commencement with his siblings and a few close friends.

“Not only we honor our God, we also honor them,” David said, translating for his dad, who’s more comfortable speaking French. “And in this country, where there is freedom, especially when people go out for college, we were able to still listen to their advice and be able to achieve what they were expecting us to do.”

Corneille’s always working hard to keep his family financially stable. He still works an overnight shift at Walmart, stocking products. Despite some financial difficulty in the beginning, he never lost hope.

Today, seven years after arriving in Dallas, all five of the Kapuku children are either enrolled in college or have gotten a degree. And David said he doesn’t just want to make his parents proud, he wants to support them.

“My number one goal has always been that my parents to not work anymore, to just do other things, so we can take over because they’ve been taking care of us since we were little,” he said.

David’s parents moved the entire family from one side of the world to the other, so finding a job during a pandemic doesn’t scare him. He said he’s open to anything.

Read more about David Kapuku and his family and KERA’s Generation One series here.