The three-piece Houston band, whose name means “airplane” in Thai, has produced a string of successful albums. And they’re about to take off on their highest-profile tour, ever. 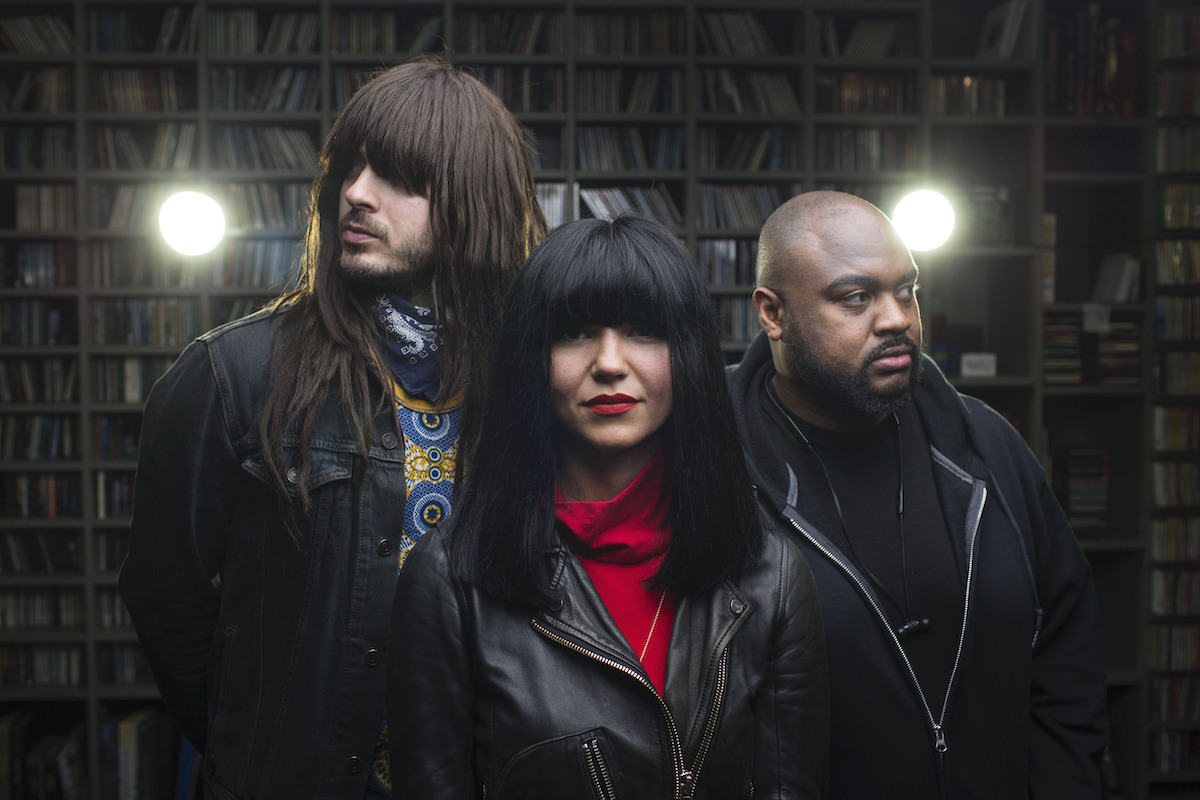 Houston's Khruangbin in the KUTX studios.

With the fall of the big record label gatekeepers, there’s more music available than ever before – and fewer artists who reach a point where they’re on everyone’s radar. But Houston power trio Khruangbin may be an exception.

Khruangbin, whose name means “airplane” in Thai, has soared to new heights since takeoff over a decade ago. Three full-length albums, an Austin City Limits TV show debut and a shoutout from legendary bassist Flea are just some of the band’s bragging rights. The band has also collaborated on a new EP with Fort Worth’s Leon Bridges, which comes out in February. It’s a follow-up to their 2020 album “Texas Sun.”

Khruangbin’s Laura Lee on bass, Mark Speer on guitar, and Donald “DJ” Johnson on drums spoke with Texas Standard ahead of a string of year-end shows in Texas that culminates in a New Year’s Eve performance in their hometown of Houston. Texas Standard: So, a New Year’s Eve show in Houston. What a way to end an epic year for, y’all. It’s got to be your biggest year yet?

Laura Lee: It’s weird that it is, but it is. I think coming back from the pandemic and having so much time off, it’s sort of weird to come back to the biggest year you’ve ever had. We’ve also never done a New Year’s show. We’ve kind of been adamant about not doing a New Year’s show because we’re sort of a chill band and we didn’t think we could pull off a party like New Year’s, but I think we can now.

The style of the band isn’t what you call mainstream, certainly. And yet at the same time, nearly everybody who knows anything about music knows Khruangbin. The fact that you guys have reached that height, D. J. did you anticipate the band being here 10 years after you all got together in Houston?

D. J. Johnson: I did not anticipate this. I don’t think any of us did. I like to say that we’re the band that kind of did everything wrong. We anything that no one could really pronounce. We don’t really kind of look like we’d be in the same group.

Mark Speer: We just wanted to play music that we liked and didn’t really care if it went anywhere. And the fact that it did was like, this is what’s hittin? OK, interesting, because yeah, I’ve been working in music for a long time before that, and I was like, you know, it’s never going to happen for me, I’m just kind of hang it up, play in a band with my friends and just do what we want to do. And that’s what took off. So follow your dreams?

Lee: I think we are really good at being ourselves in the band, especially because I was such a young player, I didn’t know how to be anything but myself playing. My friends that started bands when I was younger. I would always be like, oh, we’re going to try to do stoner rock, or Chili Peppers. They would reference a type of band that they wanted to start. But we never referenced anything that we wanted to do stylistically. It was just coming to the table, and I think it was really important for us.

And it’s funny now because I get like a Google search, Khruangbin, every day in my email and there’s so many bands like, “Oh, I’m going to go for a Khruangbin sound.’ It’s like, oh.

Texas Standard: What about Houston and, in a larger sense, Texas, as a whole? Do you feel like that has sort of been a part of your musical language?

Johnson: I feel like we sound like Houston. I guess that’s the answer. The next time someone asks, What does it sound like? It sounds like Houston. But yeah, there’s so many cultures here in the Houston area, and we, the three of us, we’re all fortunate enough to grow up here.

Lee: Yeah. I think what D. J. was saying earlier, like, we don’t necessarily look like we would be in the same band. We do look like Houston though.

Johnson: It’s so funny. We don’t even look like we belong in the same dinner party half the time. Like, there have been countless times where the three of us have walked into a restaurant to have a meal and it it’s like “table for two?” And I’m like “no, I’m here.”

Speer: I guess that’s something we experience a lot more outside of Houston.

Your live shows often have this Potpourri medley, How did you all come up with the songs to play in that and who started calling it Potpourri.

Speer: I don’t know if anyone has ever actually called it Potpourri.

Lee: We did. We did on the Chicago record. I know why we called it Potpourri. It was because of a Brazilian composer – he used to do medleys of his own songs. He had so many songs and he would call them potpourri number whatever.

Speer: I think it started because we were playing a lot of different cities and we would try to do that wink thing, like, “hey, hey y’all, thanks for coming to the show. So we’re going to play like a piece of famous music from that place.”

Johnson: I mean, originally when we first started out, the covers were part of our set because we didn’t really have a lot of songs of our own. But now we looked back at a recent show and we looked at our setlist and said, “wow, these are all our songs that we’re playing.” It’s kind of a moment.

You guys are definitely experiencing a moment right now. As you end one year, you start to move into this new tour, where are you headed? Where do you see this band, like in three years, five years together?

Speer: Yes, I think right now the hardest thing is just keeping control of it because it can get out of control really easily, really fast. I want to be able to continue making music with the integrity that we’ve always been able to do it and not have to bend to become something else or like, do this, it’ll make you more popular. I don’t care. I don’t want to be popular. I just want to make art.

Lee: Yeah. My prediction is we will be making art and we will be together.

Johnson: I couldn’t agree more. I don’t want to be popular. I just want to make music.