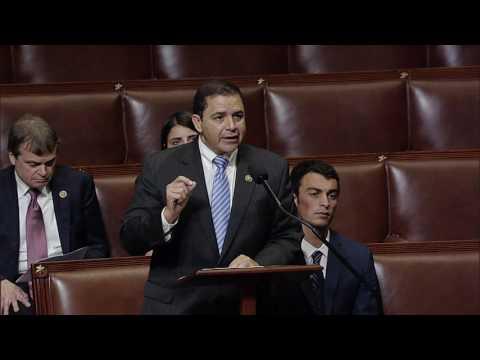 A Texas Democrat expects a bipartisan deal on border security to pass Congress this week, just in time to avert another government shutdown.

Members of the House and Senate Appropriations Committees worked out the agreement. Congressman Henry Cuellar of Laredo was the only lawmaker in the group who represents the southern border region. He says Democrats and Republicans came up with a deal that will secure the country.

“It’s not the way the president wanted; he’s not getting his $5.7 billion. Because if you put $5.7 billion, it’s going to soak up money from the Coast Guard, TSA, from other areas, FEMA, and it’s not fair to TSA, Coast Guard, or the other areas because you want to put in what I call a 14th Century solution called a wall,” Cuellar says.

The proposed deal allocates nearly $1.4 billion for physical barriers at the southern border. But Cuellar points out the agreement covers more than border-security issues.

“Along with that, there are six other bills, which includes transportation, health care, education and so many other bills that we have to keep in mind – that the deal covers all seven bills,” Cuellar says.

President Donald Trump said Tuesday he’s “not happy” with the potential budget deal, but added he doesn’t think there will be another shutdown.

A special election for a Texas House seat in San Antonio is headed to a runoff.

Republican Fred Rangel decisively secured a spot in the contest with about 38 percent of the vote in the five-way race. Democrat Ray Lopez appeared to come in second with a razor-thin lead of 22 votes over fellow Democrat Coda Rayo-Garza.

Before the results were posted Tuesday night, Lopez, a former San Antonio city council member, told Texas Public Radio the upcoming runoff will be more like a traditional election.

“It will be a Republican against a Democrat. It will be mobilizing bases. There will be more of a party delineation,” Lopez said.

Rayo-Garza sent out a statement saying she would not concede until mail-in ballots are counted.

Also Tuesday, Gov. Greg Abbott set the date for a special-election runoff for a Texas House seat in Houston. The contest for House District 145 is between two Democrats, and is set for Tuesday, March 5.

A group of researchers used satellite data to determine how many oil and gas flares have occurred in the Eagle Ford gas-shale formation. They found that between 2012 and 2016, there were nearly 44,000 flares. These flares occur when excess natural gas is burned off during oil and gas extraction.

Meredith Franklin is with the University of Southern California, and one of the authors of the recently released study. She says it’s concerning to see this number of flares because it affects air quality.

“Previous studies have suggested that living near fracking sites may be causing some health effects, but now that we’re seeing exactly how much flaring is happening, the air quality in the area is definitely a concern,” Franklin says.

And that’s exactly what Franklin is studying next: the health effects of these flares on people living in the area.