W.F. Strong on the landmark lights that dot Austin’s skies. 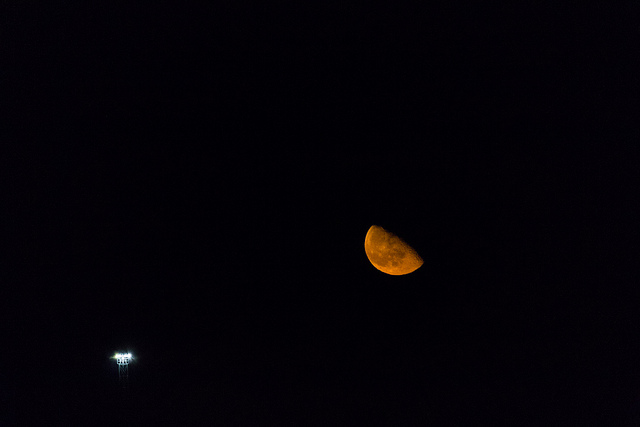 The first time I heard the term Moon Tower, I heard it from Matthew McConaughey. He didn’t say to me personally.  He said it to a carload of teenagers in “Dazed and Confused.” He told them there was a “party at the moon tower.” Next thing you see are dozens of kids sharing a keg of brew and sharing their angst beneath — and on top of — the 165-foot tower in Austin.

I later found out that these towers with the romantic name are numerous. There were originally 31 of them, but now only 17 remain in service.  Austin purchased them second hand from the city of Detroit in 1894. Detroit was reducing its network of moon lighting and agreed to sell some to Austin, providing that Austin would pick them up. This would not be a UPS sign-on-delivery deal. The very train that brought all the granite from the quarries northwest of Austin to build the Texas Capitol was sent up to Detroit to fetch the moon towers.

And they were big: 150 feet tall (165 once erected). And heavy; made of cast iron. And bright — housing six arc lights that lit up Austin as bright as a full moon could. The city fathers believed they would reduce crime and make city night-life safer for walking — and more enjoyable. The lights were installed all across the entire city, in rich and poor neighborhoods alike. And they produced a light so bright that you could read your watch by them.

Each tower lit about half a square mile. But there were negatives, too. The towers created shadows, which made it more difficult to see when moving from light to dark.  In times of fog the lights lit up the air above the fog and permeated the ground cloud with an eerie blue light that frightened people — made them worry about vampires and serial killers and such. Some believe that the lights were in fact purchased because of a serial killer, the Servant Girl Annihilator, who terrorized Austin just few years earlier.

Plenty of folks found all this night lighting just unnatural. If God had wanted us to have light all the time, they reasoned, he wouldn’t have made night. Some complained that the moon tower lights would make the grass grow 24 hours a day and they would have to mow more often. Some worried that the lights would keep people up all night and make Austin’s work force sleepy, tired and cranky. Others believed that the chickens wouldn’t roost and egg production would drop off. Dogs would never stop barking. All unnecessary worry.

It was a beautiful notion — to use the moon as your model for lighting the night. The idea was to create mini-moons and lift them high above the city to give the effect of an eternal full moon.  How magical it sounded. But arc lighting was so bright  that it had to be held up high in the sky — and placing the light 16 stories high caused the casting of broad shadows that gave wondrous light to some homes and greater darkness to others.

Eventually newer kinds of lighting were invented, such as incandescent light, that reduced this problem.  Yet it also made it possible to have lights closer to the ground that dissolved the darkness (and shadows) in a way that people preferred.  So the moon towers became less vital sentinels whose new role was to provide ambient light in support of their shorter brothers below.

Today, about half the original moon towers still stand — all 17 are working, but with more modern types of bulbs. Austin is the only city in the world where these structures still are still part of the electric, night-light grid. Amazing really. We got these moon towers from Detroit well over 100 years ago and they still work. Now, if Detroit can just learn to build cars that are that reliable.