The exhibition game isn’t competitive, but it gives special needs athletes a chance to showcase their talents alongside teams from around the world. It’s a gorgeous sunny day at the First Colony Little League field in Sugarland. The sprawling sports complex has several baseball fields, but two of them have special dugouts that are modified to accommodate wheelchairs. 15-year-old Hale Johnston is playing catch.

Johnston is one of about 100 players on a team called the First Colony Dream League. It’s part of the Little League’s Challenger Division, which is designed for players with special needs, those who have mental or physical disabilities. Johnston has been on the team for about eight years now. His mom Ann remembers his very first game, where he hit the ball off of a tee. She says Hale has come a long way since then.

“He actually has grown so much that he has a coach pitch to him,” Johnston says. “He can hit the ball to the outfield. He can catch a ball now. He can run bases. He knows the rules of the game. And just… night and day.”

The Dream League plays every Saturday, and the Johnstons come out to as many games as they can. In this league, there are no winners or losers, and everyone gets a chance to play. Today, there are more than 900 Challenger Division teams around the world. The Dream League is one of two that will play an exhibition game in the 20-15 Little League World Series. Their game will be next week at the tournament in Williamsport, Pennsylvania.

While Hale is pumped for the game, his mother says she’s amazed at how he’s gone from being a baseball novice to having such a love of the sport.

“It’s just a crazy thought that this young man has the opportunity to go to the World Series,” she says. “Just unimaginable.”

The exhibition game isn’t competitive, but it gives special needs athletes a chance to showcase their talents alongside teams from around the world. 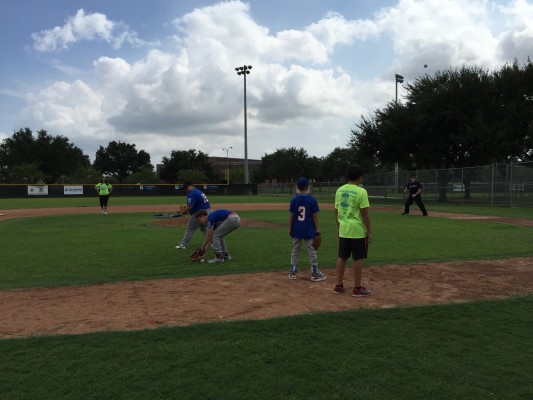 Bruce Hicks is one of the directors of the Dream League. He says hundreds of Challenger Division teams apply for a spot in the exhibition game, and he’s thrilled they were chosen.

“It was very special,” Hicks says. “I remember getting the email telling me that we had been selected, and I hooped and hollered a lot, let me tell you. It was very exciting because I knew how much fun it was going to be for these kids.”

When they founded the Dream League in 2007, Hicks says organizers recognized the need for an accessible sports program. He says the team continues to grow its roster each year.

“We bring kids from a wider area than our normal league boundaries because there aren’t enough programs out there,” he says. “We need more Challenger programs so that we reach more kids across the city.”

The league also gives people in the community a chance to work with special needs athletes. About 150 volunteers take part in its “Angels in the Outfield” program. They come out to the games and assist the players as needed.

Shameet Desai is one of 15 volunteers that will join the players as they head to the World Series.

“So we help them hit the ball, field, run the bases, mostly just watch them smile and have a great time because that’s what really makes our day,” Desai says.

Desai used to play in Little League himself, and says he enjoys giving other kids a chance to get involved.

“I haven’t seen them smile so much,” he says. “They’re running around up there. They have their Little League World Series jerseys on.”

Ann Johnston says Hale is ecstatic about playing in the game, and he’s wearing his new jersey proudly. Johnston says being a part of the Dream League has been a transformative experience for Hale, and she hopes the exhibition game will encourage more parents of special needs kids to get them involved.