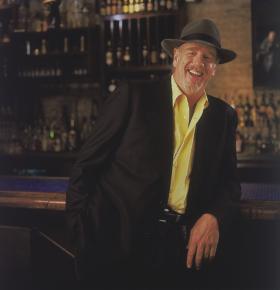 Though Ray Benson’s been the de facto musical ambassador of Austin now for decades, he admits that by stepping out as a solo artist for the first time in more than a decade, he’s just now getting to do what he always dreamed of doing when he started out in music as a teenager.

“I didn’t think I was good enough,” he confesses.

Benson’s new album, “A Little Piece“ seems to offer ample evidence he’s good enough, at least if the critics are to be believed. In fact, Tom Semioli of the Huffington Postplaces Benson’s new recording up there with the likes of breakthroughs like Dylan’s “Blood on the Tracks” and Willie Nelson’s “Phases and Stages.”

“I guess I owe someone there some money”, Benson jokes.

The self-effacing, self-described “Jewish kid from Philly” first came to Austin in the early ’70s –  in the early days of the rise of so-called “outlaw country” – fronting the band Asleep at the Wheel. The band has won several Grammys over the years, and is credited with rescuing the unique sound of Western Swing from obscurity.

Benson says part of his plan early on was to “make the music of our parents cool again,” he tells KUT’s David Brown, host of the forthcoming daily news show Texas Standard. Benson says it was important to come to Texas because all his musical heroes were from here: from Lightnin’ Hopkins to Bob Wills, and of course, Willie Nelson himself (who as it happens, first advised Benson to move to Austin).

In fact, Willie sings a duet with Benson on “A Little Piece,” an album that marks a stylistic break from the up-tempo boogie-woogie for which Asleep at the Wheel is best known. The recording, which is co-produced by Benson’s son, Sam “Lightnin'” Siefert, reflects not just Benson’s remarkable jazz-infused talent tackling a six-string and his signature smooth baritone, but some some genuinely sophisticated tunesmithery, too.  The subject matter can get pretty heavy: from lost loves to lost friends (including a song dedicated to the late J.J. Cale). “This is about growing old-er”, Benson slowly admits. “This is about life.”